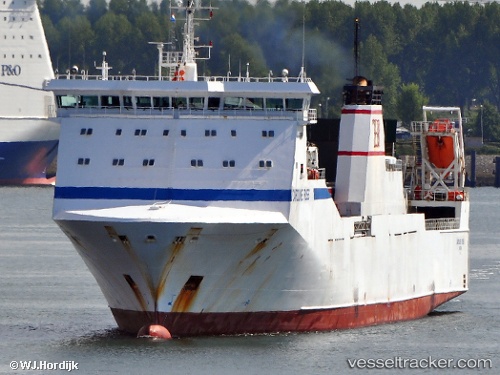 P&O Ferries has now officially confirmed the start of a Calais-Tilbury freight-only service which will start later this month with the chartered 1,625-lanemetre CAROLINE RUSS.

In response to demand on the routes from Rotterdam (Europoort and Hoek van Holland) to Killingholme, Stena Line is to add additional capacity by introducing a second ship from Europoort to Killingholme, the company said in its press release. The RoRo ship Caroline Russ, has been brought in to operate three times weekly from Europoort in the Netherlands and Killingholme in the UK, with the first departure from Europoort on October 31, 2016. The ship will join current RoRo ship, the Stena Scotia, on the route. The frequency will hereby increase to six departures per week in each direction. The Stena Scotia was introduced on the route September 2014 as a complement to the two freight ships, the Stena Transit and Stena Transporter on the Hoek van Holland – Killingholme route. http://en.portnews.ru/news/226792/

Shipping company SC Line has started up service between Fort Lauderdale's Port Everglades and Cuba, reports Sun Sentinel. The cargo and cruise vessels no longer require a special license to ply between US and Cuba. SC Line can serve the Cuban seaports of Mariel and Santiago every two weeks on a route that circles between Florida, Cuba, Panama and Colombia. On 20 September the SC Line vessel Caroline Russ berthed at Mariel in Cuba. It can carry shipping containers. It was the first call on a new service every 14 days linking Port Everglades, Florida with Mariel and Santiago de Cuba. “This new service offered by SC Line is the evident proof of the successful efforts that both Governments have been doing for the last months,” SC Line said. Port Everglades already has shipping service to Cuba from Crowley Maritime, the Jacksonville-based line authorized since 2001 to ship food, humanitarian supplies and other approved items to the island. http://www.marinelink.com/news/everglades-service-begins398429.aspx