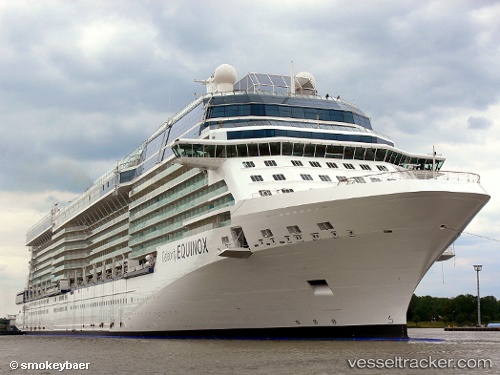 Tour boat with passengers of Celebrity Equinox sank off Cozumel

On Jan 4, 2018, a boat carrying 10 tourists from the "Navigator of the Sea" and "Celebrity Equinox" sank off the coast of Cozumel. They were on a diving excursion were on the vessel when it began taking on water about 15 minutes into the trip. Passengers were instructed by the crew to head to the bow of the boat but then jumped into the water when it began to sink. The Mexican Navy and other nearby vessels responded to the incident, helping to rescue all 10 passengers. None had serious injuries. She confirmed that all of the travelers involved were sailing with Royal Caribbean Cruises. Six were traveling on the "Celebrity Equinox" and four on the "Navigator of the Seas". The "Celebrity Equinox" was on a five-night voyage to Key West, Costa Maya and Cozumel in Mexico, and George Town, Grand Cayman. The "Navigator of the Seas" was on a five-night sailing to Costa Maya and Cozumel. Both voyages had started from Miami. Report with video: http://www.miamiherald.com/news/business/tourism-cruises/article193612034.html#storylink=cpy

The second of two cruise ships carrying passengers who were on a deadly bus crash in Mexico, the "Celebrity Equinox", made its return to Port Miami in the morning of Dec 23, with passengers departing the ship shortly after arriving. At least a dozen passengers from both Royal Caribbean‘s "Serenade of the Seas" and "Celebrity Equinox" were killed when a bus that was returning from taking tourists to the Mayan ruins flipped over. Authorities confirmed that 78-year-old Fanya Shamis from Coconut Creek was killed in the crash along with her daughter and grandson, Anna and Daniel Behar of Virginia. Behar’s husband and other son were injured in the crash. Two others from Florida, Christopher and Laura Couallier from near Orlando, were also confirmed to be among the dead. Christopher Couallier was the CFO for the Port Miami tunnel project, according to friends and family. The driver of that tour bus has been in custody as a manslaughter investigation determined negligence and excessive speed caused the crash.