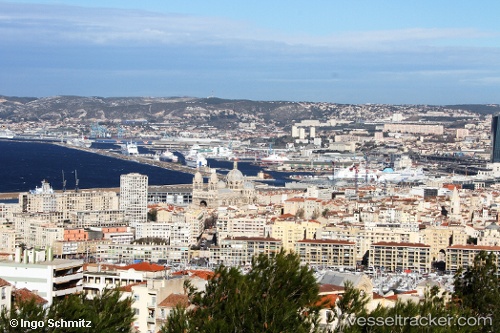 The 'AIDAblu' made a brief stopover yesterday in Marseille on April 26, 2020, to embark several hundred crew members of one of his sisterships, the 'AIDAsol', which has been moored in the port for 1,5 months. The transfer took place to facilitate the repatriation of AIDA personnel via Germany. The 'AIDAblu' set sail again in the afternoon. At the same time, another cruise ship which had been berthed in Marseille since last month, the 'Europa 2' of Hapag-Lloyd Cruises, set sail to also return to Germany, its arrival in Hamburg was scheduled for May 2. The Marseille areas now hosted six cruise ships, the 'Costa Smeralda', 'MSC Magnifica' and 'AIDAsol', 'Le Boréal', 'L’Austral' and 'Le Lyrial'. The repatriation operations of the international personnel of these ships was still in progress, in particular via flights chartered by the owners. This was particularly the case for the crew members of the 'MSC Magnifica', which arrived on April 20 and who also landed 4 tonnes of food surplus, donated to local associations to help the most disadvantaged.

On 27 June the Corsican Parliament officially approved the upcoming 15-month public ferry service between Marseille and the island, starting on 1 October 2019.