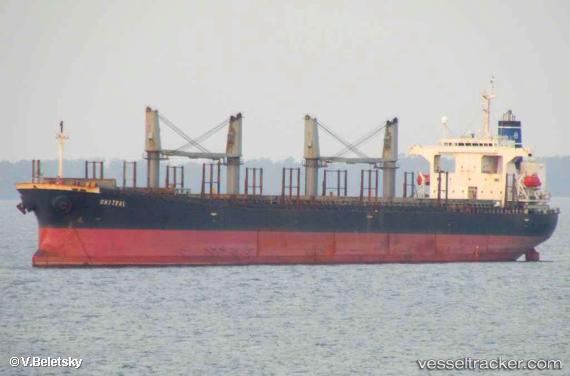 Man jumped off ship in Gisborne

A Pakistani crew member on board the "Chitral" jumped off the ship in the afternoon of May 17, and despite a search effort by fellow crew members and police, he was not located. The man ran off in the direction of Kaiti Hill. The crew joined the police in the search for him but he could not be found. The "Chitral" sailed from Gisborne on May 18 at 3.15 a.m. “Immigration New Zealand have been advised. The man can stay in the country for 28 days before he will be considered an overstayer or illegal immigrant.

The crew of Eastland Port’s pilot boat "Turanganui" braved big seas and strong winds in the night of May 13, 2017, to get help to a crew member of the "Chitral" which was at anchor in Poverty Bay. The man had developed a medical condition, and alarm was raised with the emergency services at 8.30 p.m. The log carrier was riding out the storm at anchor near Young Nicks Head. The ECT rescue helicopter flew to the ship with consideration given to a landing on the deck. But the ship was pitching too much in the swells, visibility was poor and the wind too strong, so the Eastland Port was notified and used one of the pilot boats. They got alongside and the ill man was put in a harness and managed to climb down a ladder from the ship to the pilot boat. There was a decent swell running in the bay, with a 3 to 4.5 metre wave height. The pilot boat was met by a St John ambulance back at the wharf at 11.30 p.m. and the patient was taken to hospital. He was treated and assessed in the emergency department overnight and discharged.

The Canada Border Services Agency announced Tuesday the arrest of five Pakistani nationals who jumped their ship CHITRAL in Port Alberni on July 26. The five crew members, two of whom were ship's engineers, arrived aboard the Pakistani registered bulk-cargo carrier Chitral. They reportedly deserted the ship in the early morning hours and took a taxi to Nanaimo, where they split into two groups, each heading to Vancouver by ferry. According to CBSA, the five sailors were arrested at a residence in Montreal on Aug. 16.