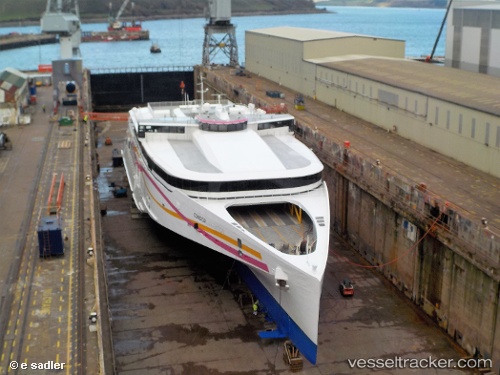 On Aug 25, 2020, the RNLI boat from Poole was alerted at 3.50 p.m. after a 36ft yacht had broken free from its mooring and had drifted into the 'Condor Liberation' which was alongside the roro berth. When the lifeboat arrived on scene they found the yacht was against the wall in between the Condor and a Jack-up-barge. Conditions were rough with the waves bouncing up off the wall, the south westerly wind gusting 6-8 was relentless. The lifeboat went to the sheltered side of the terminal and put a member of crew ashore to access the vessel, a line was put across using a heaving line, the lifeboat then towed the yacht off the wall and brought it to a mooring in the close by Port of Poole Marina. It was evident that the vessel had broken away from its mooring as there was a broken shackle on the bow and as it was all locked up, it appeared that nobody had been on-board. As all was safe and secure the lifeboat returned to station, refuelled and wash down, it was ready for service just after 5.30 p.m. Report with photo and video: https://rnli.org/news-and-media/2020/august/26/multiple-calls-for-poole-rnli-during-storm-francis

Condor was running private charter flights for foot passengers travelling between Guernsey and Jersey while maintenance was carried out on the "Condor Liberation". Any passengers looking to transfer to the private flights were urged to contact Condor on 0345 609 1026. The manufacturer of the ship's engine was carrying out preventative maintenance' including replacing the main fuel pumps. The ferry ran a revised service on Sep 6, 2019, from Poole to Jersey, Guernsey and back to Poole. It was the second time in a weekthat the service is running on reduced power. From Sep 2-4 the ferry was sailing on a revised service from Poole to Jersey, Guernsey and back to Poole. Customers were advised to check the Condor sailings updates web page for the latest information.

Fast ferry back after six weeks

The "Condor Liberation" should be sailing again by Dec 16 after more than six weeks out of service in dry dock. Sailings on the troubled vessel were suspended in late October, after a routine dive inspection revealed propulsion system problems. The ferry had been scheduled to enter dry dock a fortnight later - in early November - for annual maintenance. Now the work had finished, she has been refloated at the weekend and was already running sea trials The technical issues were thrown up during a routine inspection in Guernsey, then the vessel was re-inspected while moored in Poole. Damage was detected in the three jet propulsion buckets which are part of the directional guidance systems.