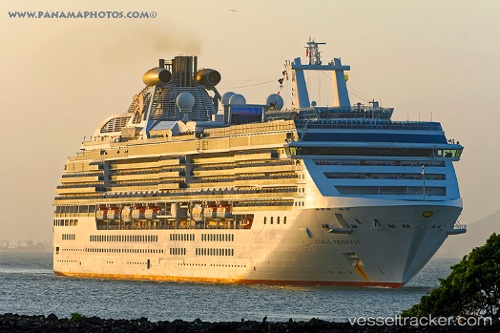 After the 'Coral Princess' lost all power to its engines as it was maneuvering away from Juneau’s docks on Aug 10, 2019. the Coast Guard fined the cruise line for not immediately reporting the close call, and the agency recently discussed the case for the first time. The Coast Guard’s investigation found contaminated lube oil in one of the ship’s diesel generators caused it to break down as the 'Coral Princess' was getting underway. Coast Guard Lt. Nicholas Capuzzi was the lead investigator for the incident. He said when a generator fails, the ship’s power management system is supposed to keep the remaining generators from being overtaxed. One of the watch officers had neglected to properly configure the generator ahead of time, Capuzzi said on May 11, 2020. That meant the surge in demand knocked out the ship’s second diesel generator as well, and both generators were offline and as an electric propulsion-driven vessel there was no longer any power to the propulsion motors.It was about 8.45 a.m., one hour before high tide, with light winds and calm seas. Even so, without propulsion, the 'Coral Princess' began drifting towards the cruise ship 'Seven Seas Mariner', moored to an adjacent dock. As the crew prepared to drop emergency anchor, a gas-turbine generator was brought online nearly 10 minutes after the blackout took out the engines which provided enough power for them to regain propulsion. Then the crew eventually brought the non damaged generator back online as well. The crew was required to tell the Coast Guard about the failure immediately. But that didn’t happen until 10 p.m. — more than an hour after the 8:47 p.m. blackout. By then, the ship had already departed for Skagway. The delay in reporting the mishap was a violation of regulations. Princess Cruise Lines — a subsidiary of Carnival Corporation — paid a $5,000 fine on February 14.

13 passengers quarantined on board for two weeks at sea

The 13 remaining passengers on the 'Diamond Princess' must stay on board and do a 14-day quarantine at sea with the crew after Miami-Dade barred them from transferring to hotels. Hundreds of passengers had disembarked at PortMiami this week, including 37 who were medically evacuated to Florida hospitals. One man, the 71-year-old Wilson Maa of San Francisco, died in a Miami-Dade hospital after waiting hours onboard for an ambulance.

The 'Coral Princess' sailed from Miami in the afternoon of April 9, carrying 13 international passengers who will stay aboard with crew for a 14-day quarantine. Princess Cruises said current travel restrictions in home countries prevented the repatriation of those passengers and local authorities would not authorize the use of hotels. Five charter flights were scheduled to depart on April 9: one domestic and four to South America and Europe. Additional crew has joined the ship to aid the self-imposed quarantine, to monitor symptoms to reduce the possibility of transmission if people were to become symptomatic. The ship was due to anchor off Port Everglades on April 10.