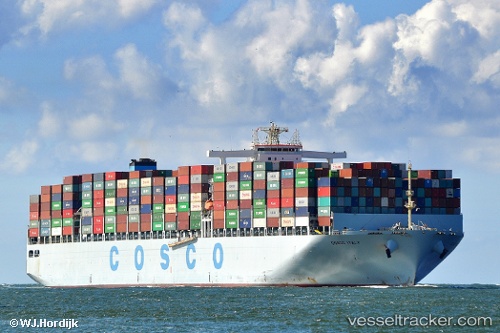 Disabled due to main engine issues, repaired and on her way to Los Angeles

COSCO has taken delivery of its sixth of a series of eight 13,386-TEU ships, the Cosco Italy, ordered in May 2008 at the Nantong Cosco KHI Ship Engineering Co (NACKS) for US$166.8 million each. After a bunkering trip to Russia, the Cosco Italy, will join the CKYHE Asia-Europe loop 3 (NE 3). She follows the Cosco Spain, delivered in January. NACKS is a joint-venture between Cosco and Kawasaki Heavy Industries and the yard already built a series of four 9,850 TEU ships for Cosco in its Oceania series in 2008, reports Alphaliner. The new 13,386-TEU ships are delivered 12 months later than expected, as their delivery was deferred due to the September 2008 financial crisis. They are postpanamax units capable to stow 20 rows of containers on deck (maximum allowed for the new Panama locks is 19 rows).