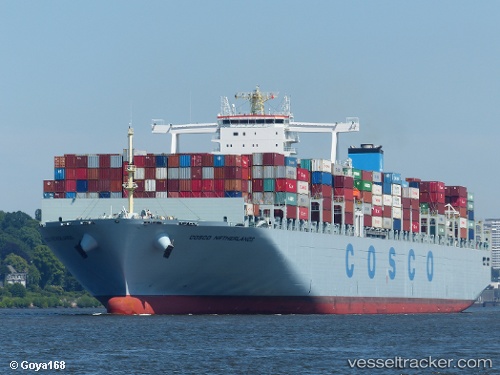 (Xinhua) -- One of today’s most technically-advanced ships in the world set sail from here on Sunday to retrace the oldest maritime route that linked China with the rest of the world. Merchant Vessel (M.V.) COSCO Netherlands is leaving Yangshan Deep Water Port at 7 p.m. local time (1100 GMT), in Shanghai, the world’s largest cargo port, and will dock in the Port of Ningbo in east China, the Port of Singapore, the Suez Canal, the Pireaus Port in Greece, and ports in Rotterdam of Netherlands, Hamburg of Germany, and Antwerp of Belgium, in its about 40-day journey. Products with internationally well-known brand, like Hewlett-Packard (HP) computers, Sony LCD monitors, Hisense TV, Haier refrigerators, automobile spare parts and bicycles, assembled or made in China, are on board for export to northwestern European and other countries. An over 150,000 ton oceangoing container vessel, the giant is 366-meter long, 51.2-meter wide and 67-meter high, and can carry up to 13,386 TEU (20 foot equivalent unit). It was manufactured by China’s Nantong COSCO KHI Ship Engineering Co., Ltd. in 2013. China COSCO Shipping Corporation Limited, owner of M.V. COSCO Netherlands, offers service on more than 100 routes globally, including those from the Far East to northwestern Europe, the Mediterranean, the Middle East and Africa, as well as regional feeders within Europe and Southeast Asia nations. Part of the route that M.V.COSCO Netherlands travels overlaps with the ancient Maritime Silk Road and its history can be traced back to ancient time. http://www.coastweek.com/4015-Chinese-vessel-sets-sail-to-revive-ancient-maritime-silk-road-legend.htm