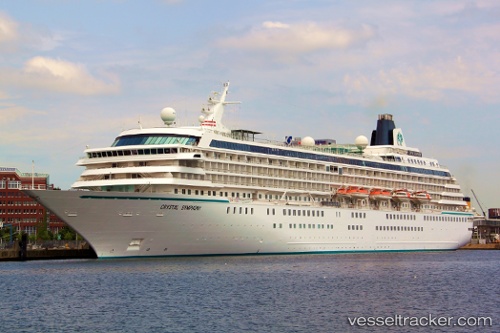 The Supreme Court Commercial Division in the Commonwealth of the Bahamas published the official notice of sale for the 'Crystal Symphony'. Inspections of the vessel are ongoing with the bids to be in by June 7 accompanied by a 10 percent deposit. According to the notice, the winning bidder in the auction will be notified by Jun 14. They would then have an additional seven days to complete the acquisition and take possession of the vessel on an 'as is, where is' basis. The vessel remained at Freeport in the Bahamas since the cruise line ceased operations in Jan 2022 as part of the broader financial collapse of its parent company Genting Hong Kong. According to reports, the management of the vessel was handed over to V.Ships after it was arrested on behalf of the banks holding mortgages on the vessel and the creditors. The banks that hold the mortgages will decide the outcome of the auctions as they could move to take over the vessel through the auction or petition the court to reject the bids if they are deemed too low. The administrators in Florida overseeing the liquidation of the company reported recently that over 30,000 creditors filed claims. In addition, the fuel supplier that set off the collapse when they moved to arrest the vessel for unpaid bills, other suppliers, former crew members, passengers with reservations, and travel agents due commissions are believed to be among the claims. The Federal Maritime Commission has also set up a mechanism for passengers covered by the cruise line's bond to be reimbursed. The scrap value of the 'Crystal Symphony' was estimated to be around 17 million Dollars, with a trading value of 18.2 million Dollars.

The 'Crystal Symphony', after diverting to the Bahamas to avoid being detained in the United States was arrested by the Bahamian authorities, on Feb 5. She has been seized after fleeing to the Bahamas to avoid U.S. warrants over unpaid fuel bills. The vessel's crew members were advised by the captain about the arrest. The ship y was anchored off the coast of Freeport in pos. 26 31 21 N, 078 48 02 W, about 1,7 nautical miles from the Port of Freeportas of Feb 5, following itinerary changes and offloading passengers. A legal dispute over millions of dollars in fuel bills prompted their multiple route changes. In January, the 'Crystal Symphony' diverted from its destination in Miami, and instead turned to the Bahamas, following a judge's order to seize it if it entered U.S. waters.

Ship still outside of US jurisdiction

The arrest warrant which was issued for 'Crystal Symphony' resulted from a lawsuit filed by Peninsula Petroleum Far East against Crystal Cruises and Star Cruises Limited, due to $1.2 million unpaid fuel bill, which is apparently owed by its operator, Genting Hong Kong Ltd. The vessel was due to arrive at the Port of Miami, United States on Jan 22, but diverted to Bimini. The vessel dropped off all its passengers abandoning them at Bimini, and the passengers had to make separate arrangements to ferry to Fort Lauderdale and then find transportation to Miami. At this time the vessel is still in Bahamian waters, and the U.S. Marshals Service was unable to seize the vessel because it was under a Bahamas flag and outside U.S. jurisdiction.