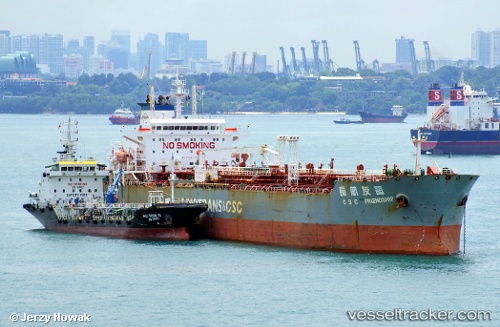 The Australian Transport Safety Bureau (ATSB) has released its prelimanary report of the breakaway and grounding of the 'CSC Friendship' in the Port of Brisbane during flooding on Feb 27, 2022. The preliminary report outlined factual information established through the transport safety investigation’s early evidence collection phase. It did not include analysis or findings, which will be detailed in the ATSB’s final report. The product tanker was alongside the Ampol Products Wharf in Brisbane, loaded with 25,000 tonnes of diesel oil and 7,000 tonnes of gasoline for a voyage to Adelaide in the evening of Feb 27. A low-pressure system and associated rain and wind was impacting the greater Brisbane area, resulting in significant flooding of the Brisbane River. At about 10.50 p.m., during an increased ebb tidal flow in the river, one of the ship’s stern lines parted suddenly. This increased the load on the 13 remaining mooring lines which, over the following 90 minutes, also failed. During this time, the ship’s crew used the main engine and an anchor in an attempt to arrest the ship’s movement, and a number of harbour tugs attended to assist. Despite these efforts, the ship broke away from the berth at about 12.30 a.m. on Feb 28, was swept downstream, and grounded to the east of Clara Rock beacon at Lytton Rocks Reach. About half an hour later, a harbour pilot arrived by launch and boarded the grounded ship via the ship’s pilot ladder. He quickly established the ship was aground with the port quarter on the bank, bow slightly in the channel, and head down river. Over the next four hours, the pilot attended the ship which was refloated 05.30 a.m. by tugs During the salvage efforts, the ship grounded a second and third time while being moved downriver and anchored at Brisbane’s ship-to-ship transfer anchorage at about 06.45 a.m. Subsequent inspections confirmed some shell plate damage, including buckling and medium to heavy abrasion of the hull, but no hull penetration or cracking of plate or welds. The ship then sailed to Port Botany to discharge its cargo, before it headed to Liuheng where it drydocked for repairs from March 31 until April 30. The ship then headed to Yeosu, where it arrived on May 6 for cargo operations, and left towards Tanjung Pelepas on May 7, where it moored on May 15. The ATSB’s continuing investigation will examine weather and flood conditions prior to and during the breakaway and grounding, the effectiveness of the port procedures, operational guidance and inter-agency communications during a flood event, and the mooring arrangements relevant to the incident. Investigators will also review internal and external shipboard communication systems, analyse relevant human factors, and verify, interpret, and analyse recorded data. Full report: https://www.atsb.gov.au/publications/investigation_reports/2022/mair/mo-2022-003/

Tanker broke loose from its moorings in Brisbane

The 'CSC Friendship' broke loose from its moorings at the Ampol Products wharf on the Brisbane River at Lytton on Feb 28, 2022, due to heavy flooding. The vessel was refloated successfully in an operation overseen by the MSQ regional harbour master with the assistance of a marine pilot and tugs. It was taken to an anchorage in Moreton Bay under its own power and moored. The Australian Maritime Safety Authority has detained the vessel, while there were no reports of oil pollution or water ingress. It remained anchored at Moreton Bay until it has been inspected by its class society, which will include an underwater hull inspection by divers. The incident was now being investigated by the Australian Transport Safety Bureau. Operations at the Port of Brisbane were at a standstill as the severe flooding hampered navigation following days of intense rainfall across the region which had washed debris into the Brisbane River. The port remained closed to all ship movements as of March 1 afternoon due to inherent risks from water velocity and the potential for debris including sunken objects and siltation build-up in swing basins, berth pockets, and the channel. The Port of Brisbane Pty Ltd was working closely with the RHM to deploy survey vessels to determine safe depth of the navigational areas as well as possible debris obstruction. The speed of the river current and turbidity at the moment was proving challenging in this regard. Maritime Safety Queensland and the state government were co-ordinating multiple salvage teams to remove any debris, and PBPL will deploy its dredge and barge fleet to assist focussing on the port precincts.

Chinese authorities had seized the "CSC Friendship" and detained several individuals, including one employee of the Swiss trading house Gunvor, as part of a probe into suspected tax evasion on imported oil in May 2016. Gunvor said it has not been notified of a formal arrest or any charges against its employee. The customs office for Guangzhou, the capital of Guangdong province in southern China, was investigating suspected smuggling of light cycle oil (LCO), a refinery by-product for diesel blending. The "CSC Friendship" was held to help investigations of Guangzhou customs. Gunvor said it had delivered oil products aboard the tanker from May 10-14. On June 1, the tanker was anchored off Ulsan, Korea. The ship was in Guangzhou from May 11 until May 13.