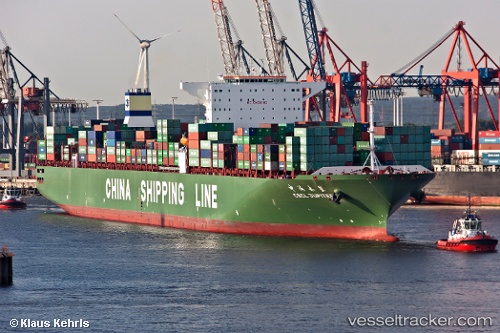 The "CSCL Jupiter" was damaged in a collision near Ho Chi Moinh City on Aug 22, 2019. She was hit by another ship when it was about to sail out of the Cai Mep International Terminal near Ho Chi Minh City and suffered hull damages. No injuries, cargo damage and pollution were reported in the incident. The Cosco Shipping expected about a week’s delay in the schedule of the ship which is being repaired at the Tan Cang-Cai Mep (ODA) Container Terminal in Phu My-Vung Tau. No casualties, cargo loss or pollution were reported. The vessel was supposed to head west and arrive in Piraeus on Sep 8, via the Suez Canal.

The path of a giant container ship that ran aground near Antwerp, Belgium on the river Scheldt on Monday has been retraced and animated thanks to satellite technology. In the sped-up video animation, CSCL Jupiter can be seen leaving a berth between Saftingen and Lilo on Antwerp’s northern outskirts, rounding two bends in the Scheldt before going off course and grounding near Bath, Belgium at approximately 0653. CSCL Jupiter reportedly suffered a steering gear failure, causing it to run aground on the banks of the Scheldt while heading for the North Sea, en route to Hamburg from Antwerp. The 14,300 TEU, Hong Kong-flagged ship blocked access to the port for some time on Monday morning (14 August), when the first tug boats attending the scene found the ship to be hard aground on a sandbank. Several hours later, at high tide, some 16 tug boats and a patrol boat are shown on hand to aid in refloating the vessel, which subsequently sailed back to Antwerp for inspection. According to the China Shipping Agency Co website in the Netherlands, China Shipping Container Lines Co Ltd, is a specialised corporation affiliated to China Shipping (Group) Company, involved in container liner and other related services. The video animation of CSCL Jupiter’s grounding was supplied by Genscape’s Vesseltracker software. https://youtu.be/lD-dsAX_o-o

Salvors managed to refloat CSCL JUPITER with coming high tide at around 1900 UTC Aug 14 with deployment of more than 10 tugs, and taken back to Antwerp for survey. She was berthed at Delwaidedok after midnight, as of 0330 UTC Aug 15 remained berthed. No news yet on damages suffered. Traffic fully restored, reportedly, vessels of up to 200 meters length were allowed navigate Scheldt since midday Aug 14. Video: https://youtu.be/2O7HLZJthGs