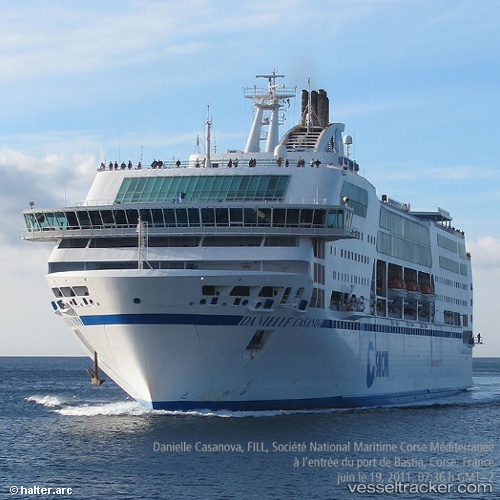 A Covid-19 outbreak was detected on the 'Danielle Casanova' in Marseille on July 11, 2020: 19 sailors tested positive. The ferry which normally operates between Marseille and Tunis is currently docked. On July 7, the company launched an extensive screening campaign. The 110 sailors aboard the "Danielle Casanova" all passed tests. All 19 who were found to be positive at Covid-19, were being followed by teams from the University Hospital Institute of Professor Didier Raoult. The Regional Health Agency has started an investigation to find out where and how they got sick. The rest of the crew were still placed in solitary confinement on the ship pending retesting on July 15.

The 'Danielle Casanova' with more than 1.000 people residing in France aboard, left Tunis on June 4, 2020, bound for Marseille, the second trip since March 13 and the closing of borders in Tunisia, where a few hundred people were still stranded. The passengers will have to take 14 days off to respect quarantine when theys arrive in France. The 'Danielle-Casanova' took on board 1,033 people and 263 vehicles on June 4 in Tunis. The police intercepted a stowaway who was trying to hide under the back seat of a car. After the last ferry sailed on March 13 and the border closed on March 15, the ferry had transported 500 passengers at the end of May. Tunis announced the reopening of its borders on June 27, in still unclear conditions.

As Fairplay Daily News reports, Siem Shipping is in talks with French transport group Transdev to purchase an interest in Societe Nationale Corse-Mediterranee (SNCM), the troubled French ferry company based in Marseilles.