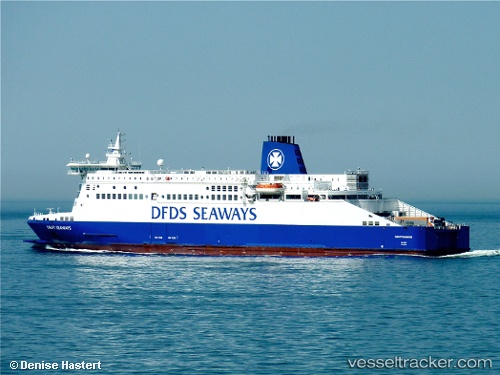 On Aug 11, 2020, the 'Delft Seaways' notified the CROSS Gris-Nez of the presence of a boat in difficulty five nautical miles north-east of Calais with four people on board. The CROSS immediately deployed the patrol boat 'Aramis' of the maritime gendarmerie to assist. It took care of the castaways as well as their boat. On the way to the port of Calais, the 'Aramis' also takes charge of 10 castaways and their boat. At 4:23 p.m., the 14 castaways landed in Calais where they were taken care of by the border police.

OnMarch 16, 2020 at 8:30 am, the CROSS Gris-Nez was contacted by the 'Delft Seaways' indicating that a boat with several migrants on board was in difficulty five nautical miles off Dunkirk. The CROSS immediately deployed the patrol boat 'Flamant' of the French Navy, the surveillance speedboat 'Scheldt', a Dauphin helicopter of the French Navy and the SNSM boat from Calais, as well as the port tug 'VB Puissant' from Dunkirk, in order to locate the boat and provide assistance. The SNSM boat of Calais first located the boat and transmitted its position. At 10.40 am, the PSP 'Flamant' and the VCSM 'Escaut' arrived in the area. The PSP 'Flamant' retrieved the 16 migrants on board the rubber boat which was taking on water. At 11.40 am, a man with severe hypothermia was transferred to the VCSM 'Escaut' to make an emergency trip to Calais where he was taken care of by the firefighters of the departmental rescue service. At 12:30 p.m., the PSP 'Flamant' disembarked the 15 other migrants in Calais who were handed over to the border police (PAF) 62. French report with photo: https://www.premar-manche.gouv.fr/communiques-presse/sauvetage-d-une-embarcation-avec-16-migrants-a-bord-au-large-de-dunkerque-59

On Nov 27, 2018, the "Delft Seaways" played an important role in a rescue operation in the English Channel. The ferry stood by the boat with eight migrants until a French rescue vessel and a police boat arrived. The crew remarked their small boat next to Dunkerque's coast. The people aboard shone with mobile phones and waved desperately. They immediately informed the rescue service and mobilized their rescue team so they were ready to help. The lives of eight migrants who were at great risk due to a large container vessel approaching. Without the intervention of crew members, none of the migrants could have survived. The eight migrants were collected by a French lifeboat and a police boat. The "Delft Seaways" could then return to its normal operation with a delay of about 50 minutes at the ferry's arrival to Dunkerque. French report with photo: https://www.premar-manche.gouv.fr/communiques-presse/deux-embarcations-de-migrants-interceptees-dans-la-manche