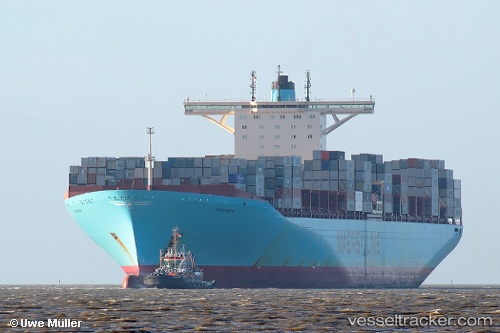 Edith Maersk: The Largest Ship Ever To Arrive On The Thames

The largest ship ever to enter the Thames is due to call at DP World London Gateway at the weekend, with estimated time of arrival in the early hours of Sunday morning, October 19. The 397-metre-long, 56-metre-wide Edith Maersk has a draught of 16 metres and can carry up to 15,500 standard containers. As the UK’s new deepwater container port welcomes one of the largest containerships in the world, photographers and journalists are welcome to witness this record-breaking event. DP World London Gateway will be setting up a time-lapse recording of the Edith Maersk’s arrival at the port and of unloading/loading operations, and a video will be available for downloading on Sunday evening.

Container vessel ‘Edith Maersk’ called at Gothenburg, Sweden, on 24 January with low sulphur fuel, as Maersk Line became the first container carrier to join the port’s Fuel Switch Program. The program will reduce sulphur emissions close to Gothenburg by 90 percent within the port control area. All Maersk Line vessels calling at the port on a weekly basis will switch to low-sulphur marine diesel oil containing less than 0.1 percent sulphur before entering the fairways into Gothenburg. The vessels are sailing in direct service to Asian ports such as Malaysia and China. Maersk Line will also switch to low-sulphur fuel while at berth for all of its containerships calling the Port of Virginia, USA, starting in February. This fuel switch program will help improve air quality in the greater Hampton Roads area by significantly reducing emissions of sulphur and nitrogen oxides and particulate matter.

Biggest ship ever in Antwerp

The port of Antwerp on Jan 13, 2012, at 6.30 p.m. expected the biggest ship to berth ever, the "Edith Maersk". The ship at 18.30 in the dock is expected. It is a trial. Like its sister ship, the "Evelyn Maersk", the visit of which was called off due the inclement weather, the "Edith Maersk" is the largest container ships in the world. All authorities gave their green light. The Edith Maersk was off the pilot station Wandelaar at 11 a.m.. It has a draft of 14.15 meters. After the trial follows a safety assessment. Exceptional is also that a handful of Flemish and Dutch observers of the Joint Nautical Authority of Scheldt and Dutch Pilots are involved. Between 5 and 6 p.m. four tugs were picked up off Bath as required. Around 6:30 p.m the container giant was to dock at the PSA terminal. The "Edith Maersk" does not only break the port length record by nearly 30 meters. With 15,500 standard containers (TEU) is also a record cargo.