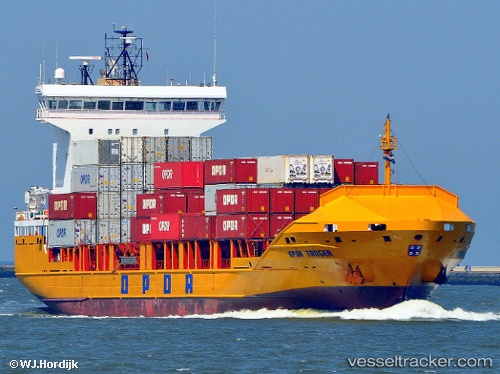 Captain died in fall on board

The Polish captain of the "EF Ava", sailing on charter to Eimskip, has died in heavy seas when the ship was enroute from Argentia, Newfoundland to Reykjavík, on Jan 29, 2019. He fell and hit his head when a large wave broke over the bow of the ship. The ship sent out an emergency call 700 miles away from Reykjavík. At that distance, it was not possible to send a helicopter out to airlift the captain to hospital. He passed away before the ship moved within helicopter range of land. The vessel berthed at the Sundahoefn Container Terminal in Reykjavík on Jan 31 at 9.20 p.m.

Speculation is rife that French shipping giant CMA CGM is about to buy Hamburg shortsea operator Oldenburg-Portugiesische Dampfschiffs-Rhederei (OPDR). News of the acquisition is thought to be imminent, well-placed market sources tell Lloyd's List. But CMA CGM, the world's third largest container line, is a member of the Ocean Three alliance with United Arab Shipping and China Shipping, was unavailable for comment. In the last few years, the Marseilles line has acquired short-sea operators such as Delmas, ANL, US Lines, CNC, Comanav and MacAndrews with a view to developing feeders for its long-haul trades.OPDR, which operates services between northern Europe and Spain. Portugal and Morocco, fits with that strategy, said Lloyd's List. The line, which goes back to the 19th century, owns seven ships and charters others, and recently teamed up with Containerships to operate a service between Agadir and St Petersburg.