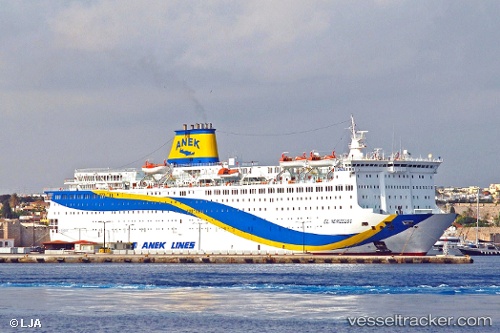 The passengers and crew of the 'El Venizelos', a total of 152 Turks and eight others, have arrived in Turkey after being quarantined in Greece on April 3. They are currently under medical supervision. On March 9, the ferry had left the port of Çeşme for Spain; five days later it reached the port of Cadiz, but a quarantine was introduced in Spain at the time, so it had to return. It requested permission to return to Turkey through the ports of Kuşadası and Çeşme, but didn't receive the permission so it changed the course for Greece and arrived at the port of Piraeus. The crew was tested, then some of them were placed in open Athens hotels, and some remained on the ship.

Two Turkish sailors, among dozens who had been transferred to hotels following an outbreak of coronavirus onthe 'Eefhterios Venizelos' in Piraeus, have been fined 5,000 Euros for leaving their hotel in spite of a 14-day quarantine imposed on them. The sailors had been aboard the ferry, which was quarantined after 119 people aboard the vessel tested positive for Covid-19. The remaining passengers and crew were transferred to hotels with instructions to observe a two-week quarantine period by staying in their hotels. Most of those aboard the ship were foreign workers and are to be repatriated as soon as possible after their quarantine period finishes on April 17.

Nearly 70 Turkish nationals aboard the 'El Venizelos' have tested positive for the coronavirus and were being treated on the vessel off the Greek coast. The ferry leased by a Turkish company, was stranded off Piraeus after being placed under quarantine with several passengers and crew among the 383 people on board infected with COVID-19. There were a total of 151 Turkish nationals on the ship and nearly 70 of them have tested positive for the coronavirus as of April 6. The Turks who tested negative have been put in a 14-day quarantine and will be evacuated to Turkey after the isolation period. The ship was carrying shipyrd workers to Cadiz but it was turned away from its destination after Spain imposed travel restrictions to combat the deadly coronavirus. When the vessel returned to Turkey, the captain rejected a decision by the Turkish authorities to evacuate only Turkish citizens from the ship and leave the remaining people on board.