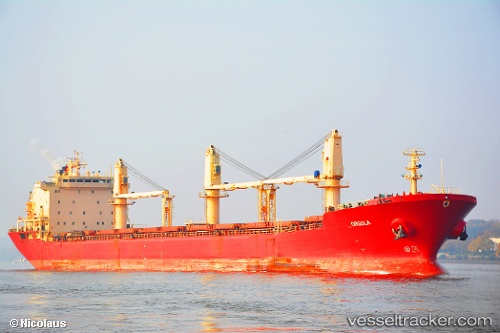 Orsula refloated and escorted to Montreal

Lightering of the "Orsula" started on Dec 27. Barges from Kingston, Ontario, were contracted for the job. Most of the hull was resting aground, the propeller was seriously damaged. The successful refloating of the vessel was completed on Dec 29. At about 5:50 p.m., response personnel from Coast Guard Marine Safety Detachment Massena, N.Y., reported the successful refloating of the vessel to prevention branch personnel at Coast Guard Sector Buffalo, N.Y. The vessel headed Montreal and was being escorted by the tug "Salvor". It docked at Jan 1, 2014, around 1 a.m. Before the transit, a dive survey was conducted to inspect the entire hull of the vessel to ensure it was safe for the vessel to continue its transit. The vessel’s class society and personnel from the U.S. and Canadian St. Lawrence Seaway Corporations cleared the vessel to transit to Montreal. McKeil Marine was hired by the ship’s company to conduct salvage operations that included the lightering of the vessel to a barge, which commenced at about 6 p.m., on Dec 27, and was completed at about 6:30 a.m., Dec 28. The Coast Guard worked with the ship’s company and the salvage company to ensure the vessel was safely refloated. A contracted oil spill removal organization was on scene throughout the operations for refloating the vessel as a precaution. No pollution, flooding or injury associated with the grounding was reported. The cause of the incident was still under investigation. Report with photo: http://www.uscgnews.com/go/doc/4007/2057254/Coast-Guard-overseeing-grounded-vessel-operations-in-St-Lawrence-Seaway

Grounded bulker to be lightered

The "Orsula" remained grounded off of Tibbetts Point in Cape Vincent since the morning of Dec 25, but salvage operations were not expected to begin until Dec 27 evening. No oil leaks, pollution of any sort or injuries were reported. Local divers surveyed the vessel and determined there was no breach in the outer hull. The vessel was still stuck hard on rocks and needed to be lightered by offloading some or all of the wheat it was carrying. The "Orsula" was transporting 21,000 metric tons of wheat from Duluth, Minn., to Montreal, Quebec. The McKeil Marine Ltd., Hamilton, Ontario, was hired for the salvage work and barges from Kingston, Ontario, also will assist in offloading the wheat which was expected to begin shortly after 4 p.m. The circumstance of the grounding was still under investigation, but the ship ran aground at 12:37 a.m. while more than 20 vessels were lined up on the St. Lawrence Seaway due to transit delays caused by an early-freezing of the river. The vessel was not holding up traffic along the shipping channel. The Seaway is supposed to shut down on Dec. 30.

The "Orsula" ran aground in the morning of Dec 25, 2013. The vessel was listed at anchor at Tibbets Point in te morning. Conversations around noon with Seaway Clayton indicated she ran aground. There was no explanation given. The crew was asked to take soundings every half hour and report any changes. Ship inspectors were being brought to check the vessel. In the night of Dec 26 night the passing "Atlantic Huron" was requested to check down as there were divers in the water. As of 01.30 UTC, Dec 27, the vessel was in the same position, anchored off Tibbets Point Lighthouse, northern Lake Ontario.