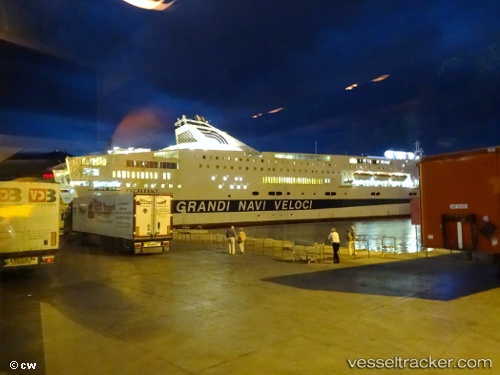 On July 14, 2020, the 'Excellent', enroute from Tanger to Marseille, requested the evacuation of a pregnant woman 14 miles south of Punta Baños. Salvamento Marítimo deployed the Helimer 220 helicopter which evacuated and transferred her to the Almería airport, where a medical ambulance took over.

Medevac between Tanger-Med and Barcelona

Salvamento Marítimo medevaced a 5-year-old girl and her mother from the "Excellent" between Tanger-Med and Barcelona in the night of Aug 19, 2019. They were hoisted by the Helimer 205 helicopter and transported to the Alméria airport, where the girls was picked up by an ambulance, which took her to the Torrecárdenas hospital.

Fire after crane collapse under control

The "Excellent", upon its arrival from Genova, was caught by a squall and slammed head on into the Terminal de Contenedores at the port of Barcelona on Oct 31, 2018, at 8 a.m. The ship had entered port to pick up passengers and vehicles and continue the trip to Tánger under pilot's assistance. The captain had requested the help of tugs, since the wind made the turning maneuver difficult. Thee starboard side bow was pushed into the South Pier and hit a gantry crane of the APM container terminal then, which toppled and collapsed. Immediately after it fell onto the quay, a fire broke out in a group of containers loaded with drums with flammable substances. Thick plumes of smoke were blown across the harbour. The Port of Barcelona activated the evacuation protocol and the municipal emergency team and several ambulances of the Emergency Medical System (SEM) as well as the "Salvamar Mintaka" were alerted, but here have been no injuries. Two people, however, had to be trieated for anxiety attacks. At 11 a.m. the firefighters of Barcelona which had attended with 12 vehicles gained control of the fire and started cooling down the containers in the area. The Municipal Action Plan for Chemical Hazard (Plaseqcat) has been activated since two containers that burned contained flammable and one more corrosive products. Crew and passengers of the ferry were safe. The ship whicch carried 400 passengers berthed at the Costa Dock one hour later. It suffered damage to the bulbous bow. The ship left the port at 11.45 p.m., bound for Tangèr, ETA Nov 2. In the early afternoon, containers were to be moved away from the area, and an investigation will be launched. The ferry was drydocked at the Rodriguez Cantieri Navli in Messina on Nov 6 at 9.30 a.m. for repairs of the bow damage suffered. She left the yard in Messina on Nov 29 at 11.30 a.m. and headed to Genova, ETA Nov 30. Reports with photos and videos: https://www.lavanguardia.com/local/barcelona/20181031/452665425747/incendio-puerto-de-barcelona-grua-ferry-excellent-video-seo-lv.html https://elpais.com/ccaa/2018/10/31/catalunya/1540973926_795338.html https://www.maritime.bg/54655-2/ https://twitter.com/i/status/1057614040749522944 https://www.elperiodico.com/es/barcelona/20181031/grua-puerto-barcelona-7120624 https://www.lavanguardia.com/local/barcelona/20181031/452665425747/incendio-puerto-de-barcelona-grua-ferry-excellent-video-seo-lv.html https://www.malagahoy.es/sociedad/incendio-puerto-barcelona-choque-barco-grua_0_1296170661.html#!