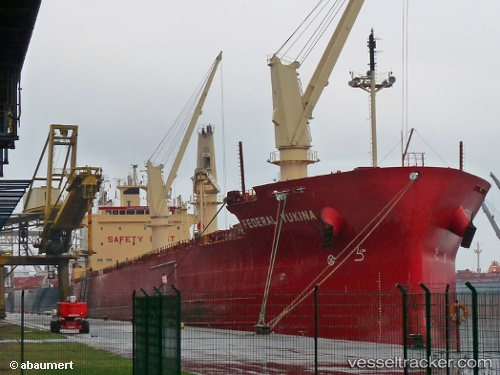 Fednav Group has invested in three new state-of-the-art vessels to trade on the Great Lakes-Seaway System. The first of these ships, the MV Federal Yukina, arrived at Federal Marine Terminals in Hamilton this week from Japan, carrying industrial slag, a material used in steel production. The vessel, which was delayed by the Japanese earthquake and tsunami, travelled to Australia and transited the Panama Canal to then call at New Orleans and Baltimore, before reaching Hamilton. It will load cargo in Hamilton destined for Mobile, Ala. The new ship was welcomed today in a special gift-exchange ceremony between Hamilton Port Authority officials and Fednav executives. The Federal Yukina, built in Japan in 2010, adds capacity to Fednav's fleet of Seaway-sized bulk carriers that regularly transport cargo from overseas, such as steel and specialized cargo into the Great Lakes while shipping US and Canadian grain, along with other bulk material, to foreign markets. The second and third vessels of the series will arrive in the Great Lakes in 2012 and 2013, respectively. More with photo http://www.ctl.ca/issues/story.aspx?aid=1000469669