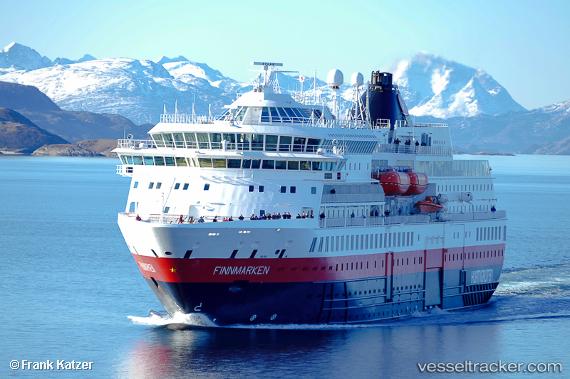 Woman died after falling from ferry

A female passenger of the 'Finnmarenk' fell from the ship as it was about to add a dock in Ålesund in Møre og Romsdal in the night of Oct 30, 2019. Emergency services, the Red Cross, air ambulance and a number of boats, including other ferries, lifeboats and fire boats, were alerted and took part in an SAR operation north of Skansekaia. After just over an hour, the woman was found by a ship participating in the search.The woman in her 40s was transferred to St. Olav's hospital in the evening with very serious injuries to which she later succumbed. The police in Ålesund was investigating the case, but so far had no basis for believing that there was any criminal action behind the accident.

Hurtigruten is to convert three of its existing passenger vessels into hybrid-powered expedition cruise ships that will operate year-round itineraries along Norway’s coast from 2021. Finnmarken, Trollfjord and Midnatsol will all be equipped with upgraded low-emission engines, battery packs and other green technologies to “drastically cut” their emissions. In addition, they will have technology to enable them to connect to shore power facilities and operate emission-free when docked in ports. Finnmarken will be upgraded in 2020 while the other two vessels are scheduled to be converted in 2021. “At Hurtigruten, the push for sustainable solutions and introduction of green technology is the core of everything we do,” said Daniel Skjeldam, CEO of Hurtigruten. “We operate in some of the most spectacular areas of the world. This comes with a responsibility.”

Norwegian cruise and ferry operator Hurtigruten is investing heavily in an eco-friendly luxury refit program for three of its existing vessels - the 2002-built Finnmarken, 2002-built Trollfjord and 2003-built Midnatsol. All three will be repowered with new Tier 3-compliant engines, along with battery packs and hybrid drive systems. This will make them the second, third and fourth hybrid cruise ships in the world (after the Hurtigruten hybrid newbuild Roald Amundsen). They will also receive new shore power connection systems. The Finnmarken will be the first to receive the upgrade in 2020, followed by Trollfjord and Midnatsol in 2021.