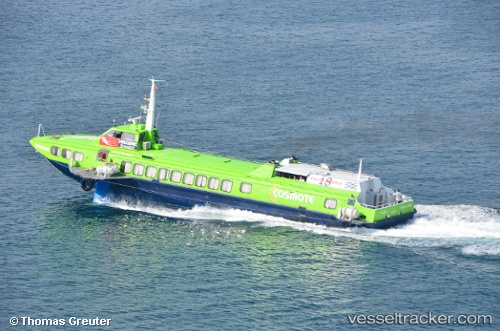 Ferry had obstrcution in its fins

In the afternoon of April 2, 2019, the "Flying Dolphin XVIII" was unable to lift due to an obstruction in its fins. The ferry which was operating a scheduled route from Piraeus to Poros-Hydra-Ermioni-Spetses-Porto Heli, returned to Piraeus and dropped off its 86 passengers. The port authority detained the ship until the damages were repaired and a class confirmation presentated by the classification society. The passengers were forwarded to their destinations by other means of the shipowner.

In the afternoon hours of Oct 30, 2018, the Port Authority of Argosaronikos was informed that the "Flying Dolphin XVIII" operating on its scheduled service from Piraeus to Poros, Hydra, Ermioni, Spetses and Portoheli, had siffered a mechanical damage at the starboard side main engine and had to return to the port of Piraeus. After it had berthed, the 64 passengers were safely dropped off. The Port Authority detained the hydrofoil until repairs were carried out and a Seaworthiness Certificate has been presented by the classification society.