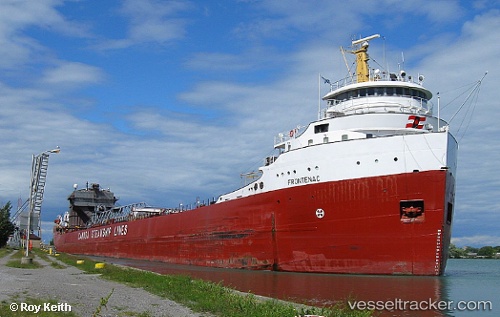 The "Frontenac" suffered a failure of its propulsion cooling system off Pointedes-Monts, Canada, on Aug 7, 2019, at 12.45 p.m. The vessel proceeded at reduced speed to Baie-Comeau, where the crew carried out repairs. The vessel later resumed its voyage from Baie Comeau to Fairport with an ETA as of Aug 12.

On October 21, the 222 meter long, 26365 dwt self-unloading bulk carrier Frontenac ran aground in the Detroit River near Belle Isle Michigan. The bulk carrier remained aground until the following day until it could be refloated by the assistance of two tugs. The Frontenac proceeded to an anchorage off Belle Isle for further inspection. No reports of injuries, damage or pollution released. The cause of the grounding was not reported.