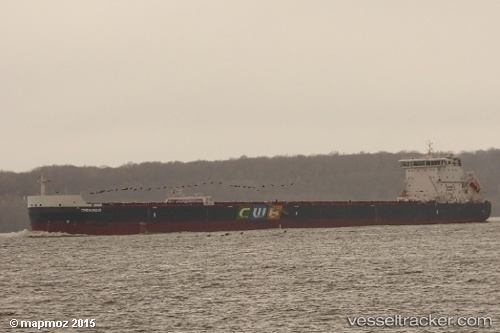 The Transportation Safety Board of Canada (TSB) has determined that delays in responding after the "CWB Marquis" dragged anchor due to contact with an ice floe contributed to the April 2015 grounding of the bulk carrier near Beauharnois, Quebec. On April 3, 2015, the "CWB Marquis", which is managed by Algoma Central, was anchored for the night at the Pointe Fortier anchorage area, below the Lower Beauharnois lock, on the St. Lawrence Seaway when it was struck by an ice floe. The ice floe pushed the vessel out of the anchorage area and caused it to go aground. The vessel was refloated later that day with the assistance of two tugs. The investigation determined that although the anchorage area itself was free of ice, most of the surrounding water was covered with fast ice—which is ice attached to the coastline or sea floor. As the wind increased during the night, an ice floe broke free and drifted into the anchorage area where four vessels, including the "CWB Marquis", were anchored. One of the other vessels was struck by an ice floe, but it was able to promptly raise anchor; however it did not report this event. As an ice floe later came into contact with the CWB Marquis, it pushed against the anchored vessel, preventing the anchor from being raised immediately. The investigation found that a delay in crew response when the vessel began dragging anchor, combined with the time it took to raise anchor, resulted in the ship going aground outside the anchorage area. Before the opening of the Seaway on Apr 2, the St. Lawrence Seaway Management Corporation (SLSMC) was responsible for the development of a vessel traffic management plan for the four vessels scheduled to enter the Seaway. Although the plan deemed it necessary to stop the four vessels in the Pointe Fortier anchorage area, the TSB investigation determined there were shortcomings in the plan and operations; some factors included: fast ice remained in the surrounding waters; forecasted increased winds were not taken into account; and the assisting icebreaker was directed to spend the night above the Beauharnois locks away from the four vessels. Following the occurrence, the Algoma Central Corporation, the vessel's management company, advised the SLSMC that its vessels would secure at available lock approach walls rather than anchoring in the presence of ice. The corporation also amended its safety management system with respect to anchoring in the presence of ice. For its part, the SLSMC added the Canadian Coast Guard manual Ice Navigation in Canadian Waters to its winter process toolkit. Full Report: http://www.tsb.gc.ca/eng/rapports-reports/marine/2015/M15C0028/M15C0028.asp

The navigation season along the St. Lawrence Seaway has come to a close now that the last ship has passed through one of the locks along the waterway in northern New York. Officials with the St. Lawrence Seaway Development Corp. told the Watertown Daily Times that the Canadian-flagged CWB Marquis passed through the Eisenhower Lock at Massena on Wednesday, ending the 57th navigation season. With the passing of the bulk carrier, all ships have now cleared the seaway. Officials say favorable weather conditions led to a "great closing" for the system that links the Great Lakes to the Atlantic Ocean via the St. Lawrence River. Workers will now perform maintenance on the seven locks in the river portion of seaway to prepare it for reopening in late March. http://cnycentral.com/news/local/st-lawrence-seaway-season-ends-with-passage-of-last-ship

First bulker of the year ran aground

The first ship of the year to travel on the St.-Lawrence Seaway, the iron ore loaded "CWB Marquis", whoich came from Hamilton, ran aground near the locks at Beauharnois, Montérégie, in the early morning of Apr 3, 2015. Around 5:30 a.m. the bulk carrier which had left the port of Montreal on Apr 1, struck huge clumps of ice near the anchorage Pointe-Fortier and got stuck. The Canada Transportation Safety Board sent a team on-site for inspections of the vessel and investigations. The ship was pulled off at 6.30 p.m. and docked in Melocheville near Montreal. French report with photo: http://www.journaldemontreal.com/2015/04/03/un-vraquier-sechoue-pres-de-beauharnois