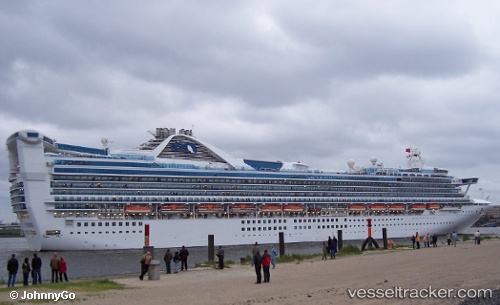 The 'Grand Princess' that stranded thousands of passengers for days off the California coast in one of the nation’s first cruise ship coronavirus outbreaks, returned to sea Sep 25, 2021, for the first time in 18 months. She departed from the Port of Los Angeles for a five-day cruise to Cabo San Lucas as part of a phased effort by the nation’s cruise companies to relaunch the $150-billion industry after a historic shutdown. The ship idled off the coast of San Francisco for several days in early March 2020 as public health officials and the cruise company deliberated over how to address an onboard coronavirus outbreak. At least 21 people on the ship tested positive for COVID-19. A week earlier, a 75-year-old passenger from a previous cruise had become California’s first COVID-19 fatality, marking a major turning point in the state’s battle with the coronavirus. As part of the new health protocols on the 'Grand Princess', all passengers will be required to show proof of a full COVID-19 vaccination before boarding and proof of a negative viral test, taken within two days of their departure date. The crew will be vaccinated, and the first few cruises will be limited to no more than 75 percent of the ship’s 2,600-person capacity. Passengers will be required to wear masks in places such as elevators, retail stores, the casino and before being seated in the main dining room and the buffet area. The ship’s heating, ventilation and air conditioning system has been upgraded with filters designed to remove fine particles and bacteria, and some units will include ultraviolet light treatment systems to kill viruses in recirculated air.

A federal judge has dismissed lawsuits by 'Grand Princess' passengers who sued for emotional distress caused by their fear of exposure to COVID-19, saying that allowing their cases to proceed would “lead to a flood of trivial suits.” Judge Gary Klausner in Los Angeles said in his ruling on July 15 that allowing passengers to collect damages based on potential COVID-19 exposure without suffering symptoms raised concerns of unlimited liability for restaurants and other businesses. Debi Chalik, a lawyer for passengers Ronald and Eva Weissberger, said she was disappointed with the ruling and might appeal.