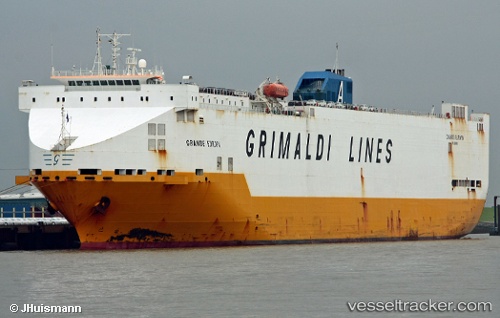 The 'Grande Europa', while en route from Antwerp to Southampton, UK, with a crew of 27 on board, suffered a fire in the engine room in position 50 52 54.0 N, 001 07 36.0 E, 5.5 miles off Dungeness Point on Nov 29, 2020, at 02.12 a.m. The vessel was not under command and without power and had no ECDIS and GPS. The vessel had radar and was assessing if its anchor could be dropped. It was situated in the southwest bound lane of the Dover Traffic Separation Scheme near the CS3 buoy. The ship had 2.153 vehicles on board. The fire could be extinguished and the vessel dropped its starboard anchor. The damage was being assessed, while there was still smoke inside the rooms. The tug 'Multratug 29' (IMO: 9795816) was deployed from Flushing to tow the vessel to its port of destination where it berthed on Nov 30 at 6.25 p.m. and investigations were started. Due to the disabled winch, the anchor had to be cut and was marked with two large blue plastic drums. The Dover and Solent Coastguard were monitoring the transit of the vessel with an ETA as of Nov 30, 6 p.m.

Fire may have been arson

The Guardia Civil arrested the captain and three officers on June 14 for the suspicion of arson aboard the "Grande Europa" which caught fire on May 15 with a cargo of 1.843 vehicles 40 kilometers off Palma de Mallorca. The ship was actually getting repaired in Valencia where the arrests also took place. Arson was suspected because the fires broke out independently. The ship has been shifted to Naples on July 2 and berthed at the Terminal Flavio Giovia at 11 a.m. She left the port again on Oct 5 at 6.40 p.m. and headed to Messina where it arrived on Oct 6 at 10 a.m. and was docked at the Palumbo S.P.A. for repairs. after repairs on Oct 25 at 3.40 p.m. and headed to Gemlik as first port of call where it docked from Oct 27 at 9 p.m. until Oct 28 at noon before heading to Antwerp with an ETA as of Nov 2, 7 a.m.

The "Grande Europa" arrived at Valencia under tow on May 23 at 03.15 a.m. after multiple postponements. The ship had left the port of Palma in the afternoon of May 20 after receiving the authorization of the Maritime Captaincy. The central government, the Balearic Government and the City Council of Palma collaborated in the coordination of the response along with different departments and rescue and emergency services. In reference to the vehicles that were carried on their ships, Grimaldi demanded greater attention on the batteries of the cars, which can generate short circuits and fires. The growth of the hybrid and electric market has increased this type of accidents. The extinction of this type of fire is very complicated and lengthy.