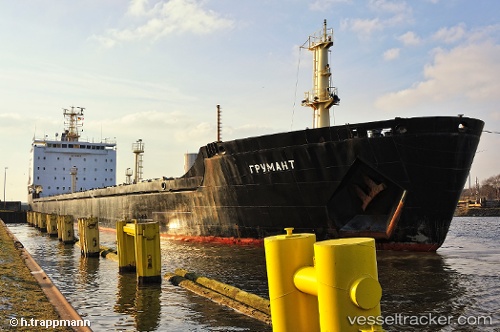 Bulkcarrier disabled in the Barents Sea

The "Grumant", being fully loaded enroute from Murmansk to Sabetta, was disabled and adrift in the Barents Sea in the evening of Oct 16, 2018. after an engine failure. The vessel was NUC since Oct 13. No assistance was requested, while the crew trying to fix the problem and restart the engine. On Oct 17 at 02.30 a.m., the "Grumant" anchored in position 69 35.4 N, 054 23.6 E. The Russian tug and icebreaker "Aleut" was en route the scene to provide assistance to the vessel.

In the foremidday of Sep 24, 2017, at 9.30 a.m. the water police Brunsbüttel carried out an inspection of the "Grumant" inside the Kiel Canal lock in Brunsbüttel and remarked that the master was intoxicated. A breathalyzer test showed 0,5 per thousand. He was facing investigations and had to pay a safety deposit of 800 Euro. It was found out that the ship, which had been enroute from Terneuzen to Gdansk, had showed defiencies several times in the past, and it was detained in the inner port of Brunsbüttel in the light of this for a Port State Control. The bulkcarrier was pulled out of the lock again by two tugs, being under command of the 1st mate, and berthed in the canal port in the foremidday. It left the port again after the sailing ban was lifted on Sep 30 at 7.30 p.m. The ship was next being bound to Gdansk, ETA Oct 2.

On Oct 26, 2012, at 3 p.m. the crew of the KNRM-station Neeltje Jans was notified about a request for an urgent medevac from the "Grumant" off Flushing. The ship had left Terneuzen on Oct 19 and was for order. The patient was transferred from the bulk carrier which was at anchor at Steenbanken, 15 miles off the coast, onto a lifeboat short time later. Dutch report with photos: http://www.knrm.nl/service/reddingrapporten/?contentID=6AABB5AE