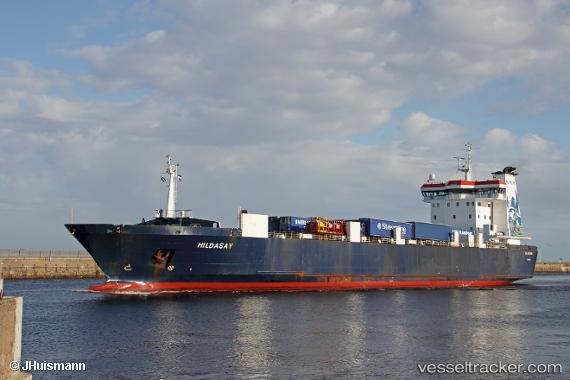 Upon entering the port of Lerwick on June 27, 2018, at 8.08 a.m., the "Hildasay" allided with a pier. The ship had sailed from Aberdeen on June 26 at 7.30 p.m. The bow of the vessel was damaged above the water line. Repair work started immediately on site. It left the port again on June 29 at 7.30 p.m. after repairs were completed and arrived back in Aberdeen on June 30 at 8.30 a.m. where it berthed at the Commercial Quay. Photo: http://www.shipspotting.com/gallery/photo.php?lid=2875703

AN AGREEMENT has been reached over low pay for workers on the Northern Isles freight vessels, which will see services return to operator Serco NorthLink. Scottish transport minister Humza Yousaf confirmed on Thursday that a new arrangement will come into place in February which will see workers being paid at least the UK minimum wage instead of rates as low as £4.50 an hour. However, transport union the RMT said that while the agreement in principle was a "welcome first step", it would be pressing for Serco NorthLink to give freight staff the same wages as those working on its passenger boats. The RMT previously claimed that around 20 foreign workers on the publicly-funded Helliar and Hildasay were being paid £2-3 less than the minimum wage by subcontractor Seatruck. Seatruck said it was entitled to pay below the minimum wage as the vessels are not UK flagged and the staff in question are not UK residents. http://www.shetnews.co.uk/news/13865-agreement-reached-over-freight-vessels-pay

TRANSPORT minister Humza Yousaf has intervened in a bid to ensure workers on Northern Isles cargo ships are paid the minimum wage. Union chiefs revealed that some staff on freight vessels Hellier and Hildasay, operated by Seatruck and contracted to run the service by Serco Northlink, are receiving less than £4 a hour. Transport union RMT have now threatened to take further action if the Scottish Government fails to deliver on its promise to intervene. Transport Scotland said Yousaf will continue to press both Serco NorthLink and Seatruck, as well as the UK Government, in an attempt to resolve the situation. “Scottish ministers are strongly of the view that all workers employed on Scottish Government funded contracts – including sub-contracts – should be paid the national minimal wage, if not the living wage, and deem the current situation with Seatruck unacceptable,” a spokesman said. “The Minister for Transport and the Islands will ask Serco NorthLink Ferries to write to Seatruck a further time, repeating the offer to fund the gap to bring the pay of crew members up to the national minimum wage, and he urges the company to accept that offer. The minister will also write to the UK Government to ask them to take action on this.” The RMT said workers on the publicly-funded Northern Isles freight vessels are being paid as low as £3.66 per hour and claimed around 20 European staff on the Helliar and Hildasay have been paid below the UK national minimum wage for the last few years. http://www.thenational.scot/news/minister-steps-in-after-union-claims-northern-isles-cargo-ship-workers-paid-366-per-hour.24155