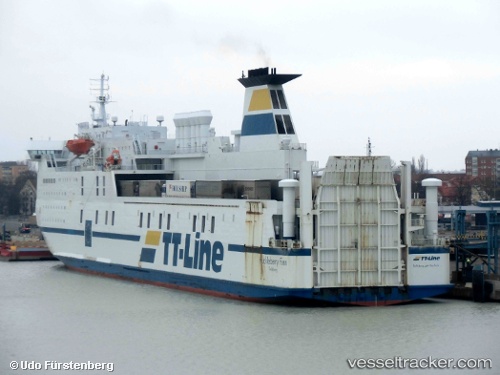 The lifeboat "Arkona" of the DGzRS station Warnemünde medevaced a 16 year old Swedish youth from the "Huckleberry Finn" in the night of Apr 3, 2018, who had suddenly fallen ill and was in need of immediate medical care. The lifeboat was alerted at 11.30 p.m. after the master of the "Huckleberry Finn“ had informed the MRCC in Bremen about the situation. The boat left port with an emergency doctor and two paramedics of the Injured Care Team (VVT) on board. Both ships rendezvoused 3,5 miles North of Warnemünde on Rostock roads. The lifeboat went alongside in winds of three Beaufort, and the medical team boarded the ferry through the pilot hatch. After the patient was stabilized, he was transferred aboard the "Arkona" along with his father. In the hospital on board the "Arkona" the sick boy was cared for until the land rescue service took over and transported him to a nearby hospital. The ferry meanwhile continued the voyage to Trelleborg.

The "Huckleberry Finn" allided with the quay in Trelleborg on Apr 21, 2017, at 1.40 a.m. The ship had suffered a rudder failure before and became unmanoeverable. Passengers on board were not injured, but the ferry had to be taken out of service. Investigations started on Apr 21, and repairs began on Apr 22. Other ships were inserted as a replacement and the timetable changed by TT line, causing several hours waiting time for booked travelers. Several trips to Rostock were cancelled completely and passengers were booked for earlier or later trips. The ferry left the port of Trelleborg again on Apr 22 at 10. p.m. and berthed at the Lindoe Yard in Vigeroe/Odense on Apr 23 at 10.15 a.m. for repairs. She left the Lindoe Yard again on Apr 26 at 1.40 p.m. and headed to Rostock, arriving there at 9.45 p.m. She resumed the service to Trelleborg at 11 p.m., arrinving there on Apr 27 at 4.30 a.m Swedish report with photo: http://www.expressen.se/kvallsposten/tt-line-staller-in-turer-efter-krock-med-kajen/

On Feb 2, 2016, at 3.20 p.m. the "Huckleberry Finn" caused an oil spill in the seaport Rostock after a fuel line ruptured. Ballast water got mixed with heavy fuel remains with an amount of on the whole 10 - 15 m². The crew quickly remarked the incident and stopped pumping out the contaminated water. An environmental company was tasked with the removal which was carried out within short time. The police launched an investigation.