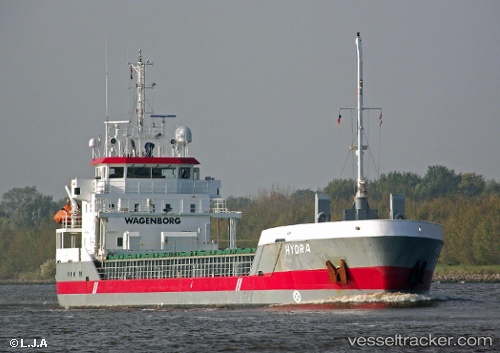 On June 21, 2021 at around 2:30 a.m., the British Coast Guard relayed a distress message from the sailboat 'Hydra 4' to the CROSS Jobourg which announced that it had a water ingrss and started to sink 22 nautical miles northeast of Barfleur. The 'Hardy', enroute from Bayonne to Hamburg with an ETA as of June 28, announced to the CROSS that it had received the distress call and then diverted to assist the sailboat. The CROSS Jobourg also broadcasts a MAYDAY RELAY message and deployed several SAR resources to the scene. The bad sea conditions prevented the launch of the freighter's lifeboat, which however managed to moor the sailboat at its starboard side. The ferry 'Mont Saint Michel' was positioned leeward to the sailboat. The three crew members of the 'Hydra 4' were transferred onto the freighter. Once on scene, the Caïman Marine helicopter hoisted the three castaways and dropped them off safe and sound at the military schools of Querqueville for support by a rescue team (SECMAR) and the firefighters of Cherbourg. Their condition did not require a transfer to a hospital. The lifeboat 'Amiral de Tourville' noticed on arrival that it was impossible to carry out a dewatering maneuver before towing. The SNSM crew noticed a slight iridescence on the surface during the sinking, which evaporated naturally thanks to the sea conditions in the area. An urgent notice to mariners (AVURNAV) was issued by the maritime operations center (COM) of the Channel and North Sea maritime prefecture to report the wreckage in order to avoid any further accidents. Report with photo: https://www.premar-manche.gouv.fr/communiques-presse/operation-d-assistance-et-de-sauvetage-d-un-voilier-au-large-de-barfleur-50

The "Hydra", being enroute from Nyköping to Antwerp, ran into the embankment of the Kiel Canal at Rüsterbergen during the westbound transit in the foremidday of May 27, 2017. The ship which had passed the locks in Kiel Holtenau at 5.15 a.m. suffered a fire in the switchboard in the engine room and got stuck at the southern shore. The tugs "Bugsier 15" and "Wal" were deployed from Brunsbüttel to pull the ship out. After it was refloated, it berthed at the South Quay of the canal pprt in Brunsbüttel around 8 p.m. Photo: http://www.shipspotting.com/gallery/photo.php?lid=2670256