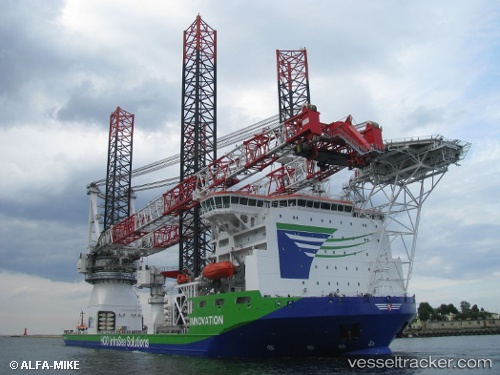 On the morning of 2 January 2017, Sif loaded its first monopile on board a sea-going vessel. The ship in question is the Innovation, a heavy-lift jack-up vessel owned by Geosea, part of the Belgian DEME Group. It was also the first job handled at the new section of Maasvlakte 2’s deep-sea quay (port number 8317). Monopiles are used for the foundations of offshore wind turbines. They can weigh over 1,000 tonnes a piece. All in all, four monopiles were loaded for transport. Together with the so-called ‘transition pieces’: connecting sections that are used to join the turbine towers to the monopiles. The Innovation left the quay the same night, en route to a wind farm off the coast of the United Kingdom where it will be installing the monopiles. This operation will be followed by a number of similar transports over the next few weeks. Members of the public can witness the activities of the Sif Group up-close during one of the boat tours departing from FutureLand, the Port of Rotterdam Authority’s information centre at the Maasvlakte. http://www.hellenicshippingnews.com/first-monopile-loaded-onto-sea-going-vessel-at-sifs-maasvlakte-2-location/

Overdick has announced that the Heavy Lift Jack-Up Vessel “Innovation” has successful completed sea and jacking trials and has been delivered to their clients of HGO Infra Sea Solutions (HOCHTIEF Solutions and GeoSea) by the shipyard Crist in Gdynia. The HLJV “Innovation” is the most capable Jack-Up Crane unit in the world and it has been designed by Overdick with the support of Wärtsilä Ship Design. This project confirmed Overdick leading edge in the design of modern, multi purpose Jack-Ups.