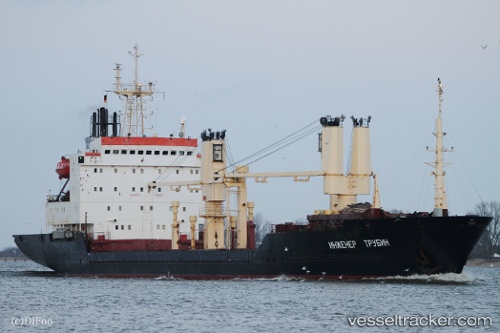 Convoy heading for Barents Sea after months in ice

In Dec 2021 the ice breaker 'Arktika' sailed into the thick sea-ice of the Laptev Sea, and from there several thousand kilometres further east through the East Siberian Sea to the town of Pevek. It was the first voyage to east Arctic waters for the new icebreaker. On its tail the vessel had three ships, the 'Polar King', Inzhener Rubin' and the diesel-powered icebreaker 'Dikson'. In Pevek, the cargo ships unloaded their cargo, most of it construction materials to the Baymskaya copper mining project, whereupon they froze into the sea-ice of the local port. They remained captured until Feb 9, 2022, when the 'Arktika' arrived and started a several thousand kilometre long escort operation across the Northern Sea Route as a basis for the further planning of year-round convoys on the Northern Sea Route. On Feb 15, the convoy was slowly approaching the Vilkitsky Stait that separate the Laptev Sea and the Kara Sea. In addition to the 'Arktika' and the two cargo ships, the convoy included also nuclear- powered container ship 'Sevmorput', which in Nov 2021 had sailed the Russian Arctic route loaded with equipment and metal structures for the nuclear power plant currently under construction in Bangladesh and started its return towards Murmansk from Vladivostok on Jan 17, and the diesel-engined icebreaker 'Kapitan Dranitsyn'. The thickness of the sea-ice in many places exceed two meters. The convoy is expected to make it into the Barents Sea in late February.

The "Inzhener Trubin", enroute from Sfax to Rotterdam, ran aground on May 17, 2019, whilst navigating the Oude Maas in the bight of Heerjansdam. The ship was refloated by the Muller Dordrecht tugs "En Avant 27" and "Sirius" and berthed in Dordrecht on May 18 at 12.25 a.m. from where it proceeded to Rotterdam and berthed at Frigocare at 2.45 a.m.

Fire in engine room injured one

In the engine room of the "Inzhener Trubin" a fire broke out while the ship was berthed at Arkhangelsk on Dec 3, 2018, at 9.20 p.m. The crew sealed the engine room and activated the CO2 fire extinguishing system. Six engines of the fire rescue were deployed too, and the fire was extinguished by 10.40 p.m. The 4th engineer suffered slight carbon monoxide poisoning. The fire damaged electrical wires on the engine room bulkheads. The ship arrived at Iskenderun on Feb 12.