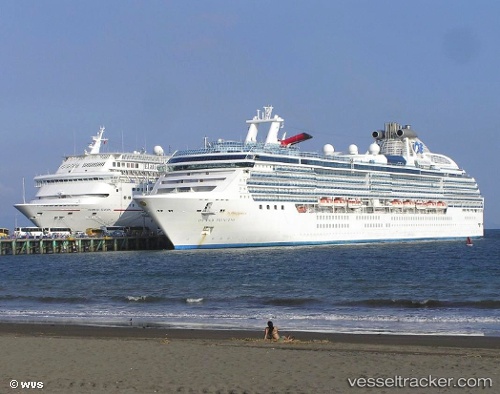 The 'Crown Princess' and the 'Island Princess' arrived in Cape Town on May 16, 2020. The 'Crown Princess' brought 2139 crew members, of which 30 were South African. The ship has used by the owners to repatriate crews stranded aboard their vessels and is due to proceed to other international ports in order to disembark other crew members. The vessel disembarked SA crew and SA medical team in Cape Town, who have been on-board the vessel for some time and required to be relieved by a fresh crew. All South African Crew disembarked and special permission was granted for a fresh medical team to embark to allow for the vessel to meet safe manning requirements before it can proceed to another port. The disembarked crew was subjected to the local COVID-19 regulations and will quarantine for 14 days before they can proceed to join their families. The vessel also took bunkers and supplies, before it sailed on May 16. The 'Island Princess' also arrived in Cape Town on the May 16 with 1416 crew, of which 62 were South African. The vessel will disembark the South African crew before leaving Cape Town.

A Coast Guard Air Station Kodiak aircrew, forward deployed to Cordova hoisted a passenger of the "Island Princes" near Hinchinbrook Island, Alaska, on Sep 4, 2019. At 10:13 a.m., Anchorage Command Center personnel received a medevac request from the cruise ship, reporting a 55-year-old female passenger was suffering symptoms of a stroke. A MH-60 Jayhawk helicopter crew safely hoisted the passenger and the ship’s nurse were taken to Cordova for a wing-to-wing transfer with a Guardian Flight team, who then transferred the patient to Anchorage for further medical care.

A 45-ftt-boat of the Coast Guard Station Valdez medevaced a 61-year-old female suffering with cardiac problems from the "Island Princess" in vicinity of Bligh Island, near Prince William Sound, Alaska, on June 12, 2019. District 17 command center watchstanders received notification from the cruise ship at 1:49 p.m. The Coast Guard Sector Anchorage command center watchstanders and a Coast Guard flight surgeon recommended the woman be transported to a higher level of care within four hours of notification. Sector Anchorage watchstanders directed the launch of a Coast Guard Station Valdez boat crew to respond. The woman was transported to emergency medical services personnel at a Valdez pier for further transport to higher medical care. The woman was reported to have been in stable condition upon transport.