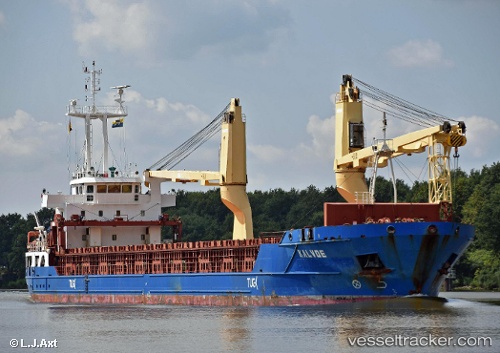 The 'Jadeland', en route from Kotka to Jors Lasfar, ran aground in the Kiel Canal during its westbound transit on Sep 25, 2021. The Portuguese safety office has commenced an investigaton into the incident together with its German counterpart. The grounding did not result in injuries or pollution. The vessel sailed from Kiel on Sep 27 at 04.20 a.m. with an ETA as of Oct 3.

On Dec 30, 2017, at 4:10, the "Kalvoe" informed the CROSS Jobourg about engine trouble which had occurred the previous evening. The ship had suffered damage to its fuel pump enroute from Las Palmas to Vlaardingen and was adrift 36 miles west of La Hague with a cargo of clay. The CROSS immediately informed the Operations Center of the Maritime Prefecture of the Channel and the North Sea, which then decided to alert the emergency tug "Abeille Liberté" in Cherbourg in regard of the very bad weather conditions in the English Channel with SW winds of 8 Beaufort and a swell of 2,5 meters. At 8:30 a.m., the "Kalvoe" reported to have repaired the damage and resumed its route at a reduced speed, towards the Casquets traffic separation zone. But at 9:30 a.m. it declared another damage and tried to drop anchor unsuccessfully for repairs. The shipowner then signed a contract with the "Abeille Liberté" which was already on scene and took the "Kalvoe" in tow at 11:30 a.m. The convoy arrive at the port of Cherbourg at 7.20 p.m. where the freighter will dock to carry out the necessary repairs. French report with photo:https://www.premar-manche.gouv.fr/communiques-presse/1-abeille-liberte-remorque-cargo-kalvoe-large-hague.html

Stowaway with drugs arrested in Tampa

Authorities arrested a stowaway on the "Dinkeldiep" on Dec 8, 2013. He was carrying more than 3,5 pounds of marijuana when the ship docked in the Port of Tampa. The Jamaican boarded the vessel without permission while the ship was berthed in a Jamaican port. After the "Dinkeldiep" took to the seas, crew members discovered him hiding aboard the vessel. The crew notified U.S. Customs and Border Patrol agents, who met the ship as it docked at berth 245. The man was arrested in the Hillsborough County Jail on a charge of felony marijuana possession. He was detained without bail for federal immigration officials.