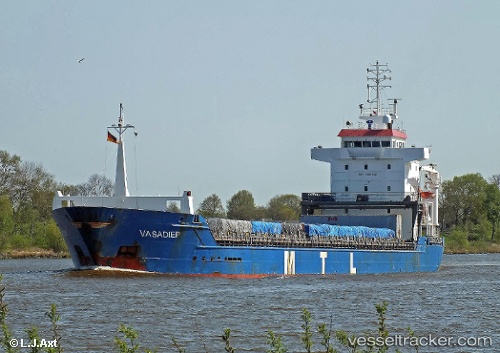 A new set of spare parts were provided by the owners as per class surveyor's recommendations, to the former "Betanzos", recently having been renamed "Valsim S". After the repair works were carried out, and the vessel left the Tuzla shipyard when the sea trails were completed on Feb 24. It headed to Izmit the same day and berthed at Derince on Feb 25 at 3.30 a.m.

The "Betanzos", upon completion of formalities, was taken in tow by the tug "Balaban" from Viana do Castelo to Tuzla, Turkey, on Nov 30. ETA in Tuzla shipyard on Dec 22. During the Canakkale strait passage, a Coastal Safety tug provided escort service for vessel and strait traffic safety.

On March 16 at 2:30 a.m. the "Betanzos" was finally refloated. The "Faairmount Alpine" started to increase the pull at midnight and managed to move the vessel to a deeper zone. In the morning hours the tugs "Monte Da Luz", "Montemuro" and "Montevil" gathered around the ship in order to pull it to the Beato Dock in Lisbon. The "Fairmount Alpine" with its 2.000-meter-towing wire was not suitable for this task. The "Betanzos" should arrive around 10:00 a.m. at the wharf where it will be inspected with particular care for the propeller and the rudder. In the keel zone, the bottom of the ship probably would not have any damage, but the fact that the propeller has been in contact with the sand may have caused some damage and this has to be evaluated. Also it was to be decided if the anchor which was cut off would have to be recovered before the ship can sail. Only after the technical inspections the shipowner can assess what the next tasks will be and develop a plan for the ship's further proceedings. The ship left Lisboa again on March 27 at 6 p.m. She docked at the Estalairos Navals de Viana do Castelo in Viana do Castelo Port for repairs on March 30, 2 p.m. Spanish reports and photos: https://www.publico.pt/2018/03/16/sociedade/noticia/navio-que-estava-encalhado-em-lisboa-ja-flutua-1806854/amp https://www.dn.pt/portugal/interior/navio-que-estava-encalhado-em-lisboa-ja-flutua---autoridade-maritima-9191262.html#media-1 https://www.sabado.pt/portugal/detalhe/armador-espera-aguas-vivas-para-desencalhar-navio-betanzos http://www.shipspotting.com/gallery/photo.php?lid=2826288 http://www.shipspotting.com/gallery/photo.php?lid=2826290 http://www.shipspotting.com/gallery/photo.php?lid=2826289