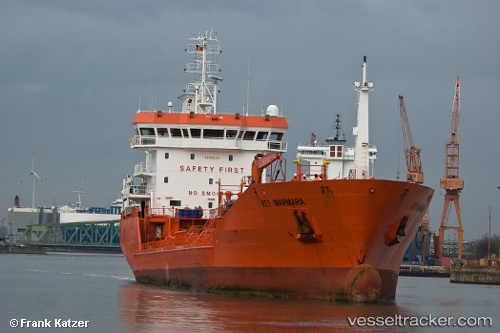 Tanker suspect in collision off Senja

The "Key Marmara" was suspected to have been in collision with a Norwegian 19-ft-angling boat of the Mefjord Brygge AS in Mefjordværwith three Polish fishing tourists aboard on April 18, 2019, at 5.30 p.m. at Senja. The Norwegian patrol boat "Sortland" rescued the three after their boat had capsized 10 miles NW of Mefjordvær in Tromsö. The Coast Guard managed to save them from the keel of the boat which was drifting bottom up. The charter boat was later taken to the Mefjord pier. The police was now investigating the cause of the accident. The three tourists were questioned before leaving home on Easter Eve. The police found that both ships were close to each other, but how close remained to be clarified. Part of the railing on the boat has been bent in, but that there was not much material damage. The tanker was still on its way from Florö, where it had sailed on April 15, to Kaliningrad, ETA April 24, 3 p.m. Norwegian report with photo: https://www.kystogfjord.no/nyheter/forsiden/Etterforsker-mulig-kollisjon-med-lastebaat

On Dec 23, 2016, the "Key Marmara" allided with the Dutch freighter "Alana Evita" which was docked in Svetly in the Russian enclave of Kaliningrad. The tanker came off course and could not stop in time so it slammed into the starboard side of the freighter which suffered a big hole in the hull - partially below the waterline - the hull being penetrated by the bulbous bow. The "Key Marmara" suffered only small damage and continued its voyage from Kaliningrad to Egersund on Dec 26, while the "Alana Evica" will have to undergo substantial repairs first. Danish report with video: http://www.maritimedanmark.dk/?Id=33376

Tugs prevented the "Key Marmara" from running onto the dam at the mouth of the New Waterway from the North Sea to the port of Rotterdam on Nov 21, 2015. The ship had suffered engine failure in pos. 51°.59.01 N 004°.02.03 E. Although the anchors were dropped, the tanker threatened to hit the wall in swells of up to two meters and six Beaufort wind at 2.20 p.m. Tugs which were escorting the "Stena Hollandica" towards the North Sea, could get the ship under control at 2.34 p.m. only ten meters from the stone blocks of the south jetty. Also the KNRM boat "Jeanine Parqui" of the Station Hoek van Holland and the Pilot tender "Aquila" provided assistance. The tanker has been towed towards Vlaardingen, where it was being checked after having berthed at Vopak at 2.25 p.m. The tanker left Rotterdam again after inspections and engine repairs on Nov 22 at 3.30 p.m., being bound to Rostock, ETA Nov 24. Dutch reports with photos and video: http://www.rijnmond.nl/nieuws/21-11-2015/slepers-trekken-stuurloze-coaster-weg-bij-monding https://www.youtube.com/watch?v=gy1FXBAeibA https://www.knrm.nl/waar-wij-zijn/reddingstations/hoek-van-holland/reddingrapporten/coaster-bijna-wrak-op-blokkendam-64a5b3b2ac http://www.binnenvaartkrant.nl/nieuws/nieuwsitem/