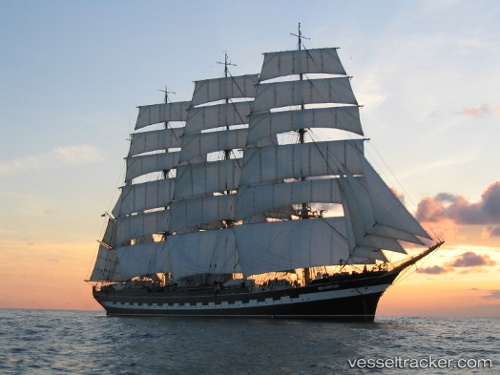 Training tall ship Kruzenshtern has completed the international commemorative expedition of the Federal Fishery Agency’s tall ships dedicated to the 70-year anniversary of the Victory in the Great Patriotic War, the Ageny’s press center says. In the navigation period of 2015, the Kruzenshtern made three voyages, visited 11 states having called at 16 foreign and 7 Russian ports. All in all, the barque covered over 29,000 nautical miles. For most of the year (more than 250 days) she was sailing between the Arctic and the Middle East. The welcoming ceremony was held on November 4 at LieutenantShmidt embankment in Saint-Petersburg. The four-masted tall ship was built in 1926 at Geestemünde in Bremerhaven, Germany and named after the Italian city the Padua. She was surrendered to the USSR in 1946 as war reparation and renamed after the early 19th century Baltic German explorer in Russian service, Adam Johann Krusenstern (1770–1846). The sail training ship is homeported in Kaliningrad. The ship is owned by the Baltic Fishing Fleet State Academy (State Technical University of Kaliningrad). The famous four-masted barque Kruzenshtern will celebrate her 90th anniversary next year.

On Oct 22, 2015, at 11.35 a.m. the CROSS Gris-Nez was alerted by the "Kruzenshtern" because one of its crew members, aged 52 years, complained of abdominal pain. The ship was 35 nautical miles northeast of Fécamp. After a conference call between the Maritime Medical Consultation Centre (MMCC) in Toulouse, the CROSS Gris-Nez and the maritime medical coordination in Le Havre, a medical evacuation was decided. The CROSS Gris Nez dispatched the SNSM boat "Cape Fagnet" from Fécamp which took the patient on board at 3:03 p.m. and brought him to the port of Fécamp, where an ambulance was already waiting.

Man over board during manoever

A crew member of the "Kruzenshtern" stumbled and fell fifteen meters down into the North Sea on Aug 19, 2015, while hoisting sails as the ship approached Amsterdam. Because he did not immediately reemerge and the ship sailed on, the fear was that the man would be run over. A small sloop saved the man who had only suffered a scratch on his face.