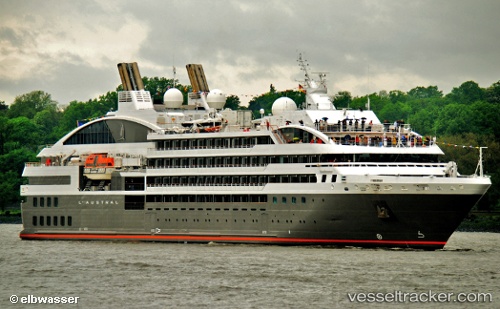 All 380 passengers on board the 'L'Austral' and 'Le Boréal', which docked in Rio de Janeiro on March 24 and 26 after a long journey in search of a port accepting welcoming them, could be repatriated. The last passengers flew home from Brazil in the nigh of March 29. The 'L'Austral' sailed from Rio back to Marseille on March 25.

Report: Grounding could have been avoided

The grounding of the "L'Autral" on Feb 9, 2017, could have been avoided if crew had spoken up about it no longer being on track, a Transport Accident Investigation Commission has found.The vessel was entering Milford Sound on February 9, 2017, when it struck a bank, damaging part of the hull. The commission's report, which was published on July 26, 2018, said an electronic navigation system was being used to guide the ship in the dark. As it was making a turn off Dale Point, the authorised harbour pilot lost awareness of exactly where the ship was, the direction it was heading, and the effects of the wind and tide on the ship. The report found the ship had deviated off the planned track and ran into a stony bank near the shoreline of Milford Sound. No-one aboard was injured and the ship suffered minor scaping and indentation on the starboard side of the hull, but it was not breached. The commission found that the ship's crew on the bridge noticed the ship was off its planned track, however did not bring this to the attention of the pilot until it was too late to avert the grounding. The bridge team did not make full use of the ship's electronic navigation systems to ensure the ship stayed on track, the report says. Safety issues identified were the navigational system not being used to its full potential as a tool for planning and monitoring the ship's passage, and the standard of bridge resource management did not meet good industry practice. Ad Feedback The commission also found there were risks in conducting "blind pilotage" with large ships in confined waters that had not been fully considered by the authority that regulated maritime activity in the area, Environment Southland. It was noted that previously poor bridge management under pilotage had been a factor contributing to accidents involving two other ships in New Zealand. The commission made several recommendations aimed at improving the standard of pilotage and making the transition of the pilot into the ship's bridge team seamless.

The "L'Austral" with hundreds of tourists on board was expelled from the waters of Banyak Islands, northwest Sumatra after she was spotted by locals on Nov 16, 2017, being anchored off Asok island, and engaged in recreational activities. The ship wasn’t authorized to make a call to the islands, and that call wasn’t listed in her itinerary. She was requested to leave immediately. In the night of Nov 18 the ship was cruising in the Indian Ocean in southeast direction towards the Sunda Strait. The Compagnie du Ponant commented as follows: Marseille – France, 21 November 2017 Statement On 18 November 2017, L’Austral, a cruise ship belonging to French cruise company PONANT sailing in the Banyak archipelago in Indonesia, altered course to stop in Palau Asok. Both the Captain and the expedition leader made this choice in order to offer passengers a more interesting programme than the one initially scheduled. It was a regular decision taken in strict accordance to maritime rules. The ship received prior formal written authorisation from the port agent responsible for the area and the stopover went smoothly and without incident. During the call local authorities paid two routine visits to L’Austral. No problems were identified. No expulsion measure was taken against the ship. Passengers’ disembarkations and embarkations were organised in accordance with the company’s procedures and timing. The ship wasn’t docked but anchored at sea. L’Austral continued sailing as planned in the Indonesian territorial waters without any troubles from the local authorities.