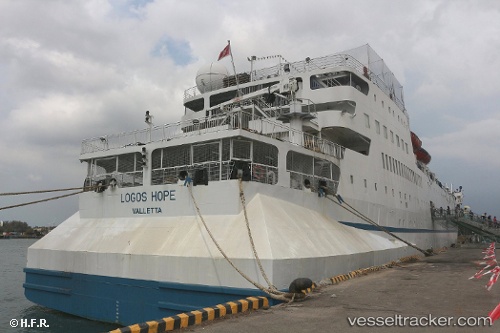 Passenger (cruise) Logos Hope (12519 gt, built 1973) came in contact with bulk carrier Desert Osprey (31848 gt, built 2015), while proceeding downstream at the 408 kilometre mark on the River Parana, Argentina, on Jun 26. Reportedly, there were no major damages to the hull of both vessels. Following the contact, both vessels were anchored for a thorough inspection by the Naval Prefecture to assess whether the vessels is seaworthy. The vessels are reported to have sustained some damages, which is not considered serious at this stage.

LOGOS HOPE, the world’s largest floating book fair, berthed at the Tema Port on Wednesday on its second visit to Ghana. The famous vessel, with her crew and staff of approximately 400 Christian volunteers from 60 nations, docked at Clinker Ghacem Gate to begin the 31-day book fair in Tema. MV Logos Hope will depart Tema Port on October 2 after which she will head to Takoradi for another fair from 6 October – 23 October, 2016, which opens from Mondays through to Saturdays before the ship heads for the Caribbean. http://www.peacefmonline.com/pages/local/news/201609/291622.php

Logos Hope to depart from Singapore after 5 month overhaul