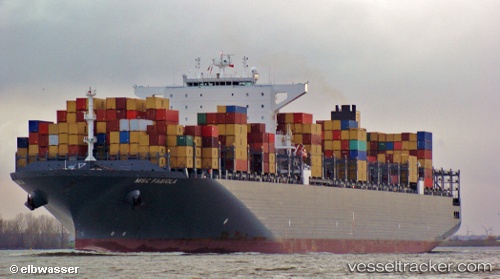 The "MSC Fabiola" was to be repaired in dry-dock at the Dalian Shipyard, coming from Chang Xing Dao, where she berthed on May 27. The generator failure which led to the grounding was caused by two jammed injection pumps leading to a blackout and siubsequent steering failure.

The "MSC Fabiola" was refloated on Apr 29 at the southern end of the Suez Canal after running aground at canal km 144 following a generators malfunction, leading to a blackout, and steering failure. Northbound convoys have been suspended on April 28, 2016. The vessel ran into trouble due en route from Malta to Oman. It was the tenth vessel in the Southbound convoy of 20 vessels, while the rest of Southbound convoy of eight vessels have been detained. The Southbound convoy started at 8 a.m. local time and stopped and waited at Great Bitter Lakes. The ship was refloated on Apr 29 by the tugs „Mosaheb 4“, „Mosaed 4“, „Port Said“, „Baraka I“, „Mosaheb 2“ and „Ezzat Adel“ and was towed to Suez allowing all Soutbound vessels - the remaining eight from 25) to clear the canal following trials. Actually the tugs "Mosaed 4" (IMO: 9581502) and "Port Said" (IMO: 9305984) were connected to the casualty which was taken to an anchorage near Suéz meanwhile. Photos: https://pbs.twimg.com/media/ChMjkEdWMAAj_B9.jpg:large https://pbs.twimg.com/media/ChPN2XKUgAACgBg.jpg:large https://pbs.twimg.com/media/ChNNJq6WUAE1Qhc.jpg:large

A ship blocking the Suez canal can cause a major disruption to trade. Ships transit the canal in a convoy system and a prolonged blocking of the canal can cause disruption to the convoy schedule. On Thursday, April 28, 2016, the containership, MSC Fabiola, ran aground in the Suez Canal. Some of the vessels that should all be moving south through the canal can be seen through Genscape Vesseltracker queued up and stationary behind the MSC Fabiola. Some of the vessels that should all be moving south through the canal can be seen queued up and stationary behind the MSC Fabiola. SOURCE: Genscape Vesseltracker Added time to ship voyages is a major expense for shippers, especially those on charter paying daily rates or incurring penalties if voyages over run. The Suez Canal Traffic Statistics site shows the normal volume of traffic through the canal. The Suez Canal is the gateway to Europe for much trade, oil from the Middle East, and containerized shipments from Asia mainly all go through the canal. If the canal is blocked for a long period, then the alternative route between Europe and Asia involves going around the Cape of Good Hope, adding over 4,000 miles to the voyage to most European ports. At 15 Knots, that takes an extra 11 days for the journey between the Arabian Gulf and Europe. As well as saving time, using the canal can save money. The largest single expense for a ship is it’s bunker costs. A large ship doing 15 knots may use 40+ tons of fuel a day and at current bunker rates of about $180 MT this amounts to $72,000 to cover the extra 4,000 miles. Now some of that extra cost would be discounted against canal fees, but it is evident that there are long delays and high costs involved in not using the canal. The MSC Fabiola blocking southbound traffic can impact all ship operators trading between Europe and Asia in all but the very largest ships that can not transit the canal. Anyone from the cruise industry, oil, gas, and containerized trade are also affected. http://info.genscape.com/containership-msc-fabiola-grounding-blocks-suez-canal-vesseltracker