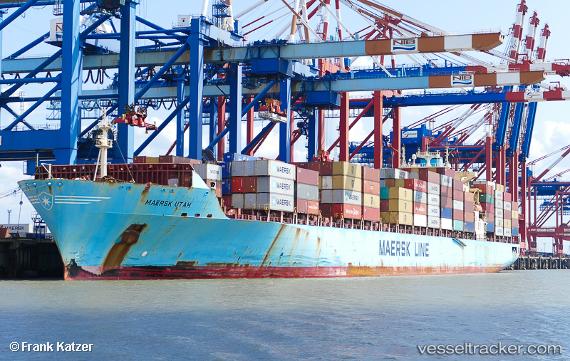 Crew of Maersk Utah honoured for rescue at sea

The "Maersk Utah"-crew has been honored with Mariners’ Plaques for performing rescue at sea. The award to the officers and crews was presented at the Admiral of the Ocean Seas (AOTOS) award dinner on Nov 15, 2013, in New York. The "Maersk Utah" received the AOTOS Mariners’ Plaque for their participation in the rescue of 83 Syrian refugees. On the night of Aug 9, 2013, the vessel was about 70 nautical miles off the coast of Sicily when officers received a distress call regarding a small craft. Aboard the ship were Master Robert H. Sienel, Chief Mate Joe Single, Second Mate Bryan Phillips and Third Mate Thomas Komenda. The containership altered course and increased speed to reach the distressed boat before nightfall. The "Maersk Utah" approached the craft and stopped alongside at 8:33 p.m. At this time it became clear that the boat, approximately 15 meters long, was carrying many people of various ages, gender and physical condition. The "Maersk Utah" maneuvered into position to shield the refugees’ small boat against the rising wind and sea, while the Italian Coast Guard, with trained ship and crew, were in route to perform the rescue operation. Over the next 9.5 hours, the Container ship sheltered the boat while the Italian Coast Guard completed the rescue. The first Coast Guard vessel arrived at about 01:28 a.m., but was too small to execute the rescue in such rough seas. The "Maersk Utah" received instructions to provide shelter for both boats while awaiting the arrival of a larger rescue vessel. The second Italian Coast Guard vessel arrived at 03:54 a.m. and began rescuing the refugees. Finally, at 10:00 a.m., the rescue of all 83 refugees was complete and the "Maersk Utah" was released to continue its voyage to Algeciras.

Port Qasim Authority (PQA) on Nov 13, 2011, safely berthed the largest container ship which has ever visited Pakistan's second largest port. The "Maersk Utah" with a draught of 11.7 meters was moored at the Qasim International Container Terminal before proceeding further to Nhava Sheva on Nov 14, ETA Nov 16.