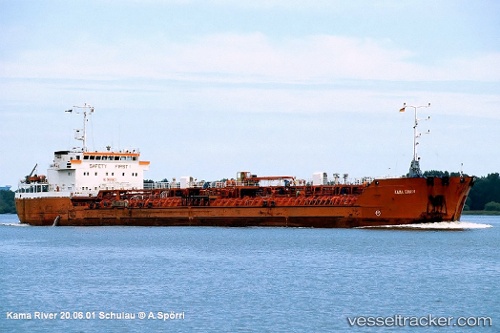 The bulkcarrier "Doric Warrior" allided with the moored "Mammmad Amin Resulzader" off the Zeytinburnu coast on Ahırkapı Anchorage in the Marmara Sea on Aug 13, 2019, at 10 p.m. The bulk carrier was en route from Newport, USA, to Yuzhniy. The tanker had sailed from Altinova on Aug 10 and was bound to Zeyport. Both ships were intending to transit the Bosphorus at the time of the accident. The tanker suffered a dented bulwark at the port side foreship, the bulkcarrier scratches and dents at the starboard bow above the water line. The master of the tanker initially had feared his ship was heavily damaged and in danger of sinking. The General Directorate of the Coast Guard sent three tugs and three rescue vessels to the site of the collision. Zhe movement and activities of other ships and tankers were temporarily suspended. On Aug 14, both ships were moored at Ahirkapi anchorage, close to each other. In the morning more thorough damage inspections were resumed with the daylight. The tanker was moored in pos. 40° 58.37' N 028° 55.38' E., the bulk carrier in pos. 40° 58.86' N 028° 55.16' E with the lifeboat "Kiyi Emniyeti 3" (MMSI: 271010031) alongside. The tanker shifted to Yalova on Aug 18 and entered the Cesme Shipyard on Aug 23 at 1.15 p.m. for repairs. The "Doric Warrior" left Istanbul on Aug 20 at 9.30 a.m. and headed to Yuzhny, ETA Aug 24. Reports with photos and video: https://www.youtube.com/watch?v=DtCPrbRLl2k https://haqqin.az/news/156075 https://www.takvim.com.tr/guncel/2019/08/14/zeytinburnu-aciklarinda-kaza-yapan-gemiler-havadan-goruntulendi https://www.sabah.com.tr/webtv/haber/istanbul-zeytinburnu-aciklarinda-iki-gemi-carpisti https://www.ukrinform.ua/rubric-world/2759827-u-marmurovomu-mori-zitknulisa-tanker-i-suhovantaz-so-pramuvav-do-ukraini-zi-ssa.html

Tanker arrived at shipyard after arrest

Crew waiting for wages to get paid, lacking of fuel and water

The crew of the "Adriatic Mariner" of the Turkish company Palmali, including Russian sailors claimed to have not been paid salaries after dropping anchor on the port roads of Ereğli on Aug 27, 2018, without drinking water and almost without fuel. One sailor needed medical assistance. This was reported on Aug 27, 2018, by the chairman of the trade union committee of the Rostov city trade union organization. The nine crew members were waiting for $ 110.000 wages. The crew required the company to pay their wages, otherwise they will initiate the departure to a Russian port in order to arrest the vessel through judicial Russian bodies.