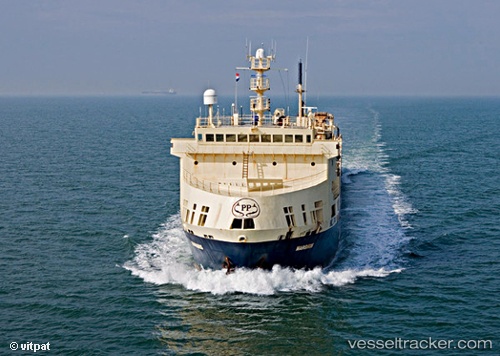 The environmental group Sea Shepherd has obtained aerial footage of a large-scale release of dead fish off the coast of France, drawing scrutiny from the public and from regulators. Its patrol vessel 'Age of Union' is operating in the Bay of Biscay off La Rochelle, monitoring four factory trawlers to collect evidence of dolphin bycatch. On her most recent patrol, the vessel observed a release of thousands of blue whiting into the ocean. This catch came from the 'Margiris', the second largest trawler in the world. Sea Shepherd asserted that the fish were illegally dumped over the side, but the Pelagic Freezer-Trawler Association (PFA) - which represents Margulis' operator, clarified that on Feb 3 around 05.50 a.m., an amount of blue whiting was involuntarily released into the sea from the vessel, due to a rupture in the cod-end part of its net. The accident was caused by the unexpectedly large size of the fish caught. Report with photo: https://www.maritime-executive.com/article/photos-of-spilled-catch-shock-european-fisheries-regulators

The 'Margiris' has shed more than 100,000 dead fish into the Atlantic Ocean off Franc early on Feb 3, 2022. The French maritime minister, Annick Girardin, has asked the national fishing surveillance authority to launch an investigation. Virginijus Sinkevicius, the European commissioner for environment, oceans and fisheries, was also eeking exhaustive information and evidence about the case. The spill was caused by a rupture in the trawler's net. In line with EU law, this has been recorded in the vessel's log book and reported to the authorities of the flag state Lithuania. The dead fish would be subtracted from the vessel's quota. The ship had arrived in the position 82 nautical miles southwest off Guilvinec in the evening of Jan 30 and was located 116 nautical miles southwest off Guilvinec in position 46 35 17 N, 006 31 08 W, as of Feb 3 at 5.30 p.m.

The Margiris/Abel Tasman/Klaipedia (Lithuania) has left Port Lincoln at 1.30pm (CDT) on Wednesday afternoon, March 6, 2013 to look for another fishing ground. Seafish Tasmania endeavoured to use the vessel to catch their quota in the pelagic fishery but has been prevented from doing so by numerous community protests and then the Australian Government preventing them from using the Margiris to trawl. The federal environment minister has subsequently signed an interim declaration to prevent Seafish Tasmania also using the vessel as a processing factory ship. Seafish Tasmania has incurred the daily expense of mooring the ship in Australia waiting to go fishing... and is now taking legal action against the governemt decision to prevent this business venture from operating at this time. Fisherman have been watching the case with interest... none more so than the fishing industry based in Port Lincoln in South Australia. http://blogs.abc.net.au/tasmania/2013/03/margiris-abel-tasman-klaipedia-a-fishing-vessel-looking-for-a-new-home.html