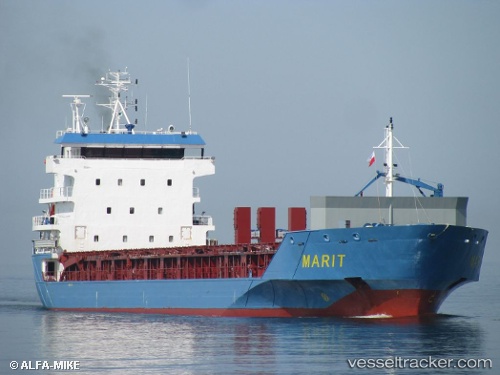 The 'Marit' while en route from Kemi to Mersin requested medical assistance for its captain on Nov 15, 2019, off the Portuese coast. The 50-year old Dutch man complained of eye problems. The ship changed course following the MRCC Lisbon instructions. The man was medevaced and taken ashore at Viana do Castelo aobard the SAR boat 'Atento' in rough weather conditions. The 'Marit' continued her voyage after the master was taken off.

The "Marit" en route from Thisvi to Orkanger with a crew of eight on board, suffered a blown main engine exhaust gasket, approximately 61 miles west of Lundy Island, in position 51 10 24N, 006 04 48W, on Sep 7 at 07.40 a.m. Repairs were expected to be completed by 12.30 h p.m. No help was requested. The vessel was carrying 5.908 tonnes of steel pipes. After completion of repairs, the ship resumed its voyage to Orkanger with an ETA as of Sep 10.

The "Marit" caught fire at Lisahally dock in Londonderry in the morning of Jan 26, 2016. The blaze broke out in a cabin at 6.50 a.m. The port’s emergency response plan was instigated and the fire service were called out. Four fire appliances from Crescent Link Fire Station, four from Northland Road, two from Strabane and specialist rescue teams from Belfast and the Fire Emergency Support Service dealt with the fire. Firefighters wearing breathing apparatus and using hosereel jets dealt with the fire, working closely with the local Port Authority during the incident. All crew members were accounted for and there were no reports of any injuries. Firefighters finished at the scene shortly before 8.30 a.m. Cargo operations have recommenced and the vessel was due to sail on Jan 28. It had arrived, coming from Gdynia, on Jan 25 around 9 p.m. Report with photo and video: http://www.londonderrysentinel.co.uk/news/londonderry-news/watch-smoke-billowing-from-dutch-cargo-ship-the-marit-in-londonderry-1-7181088