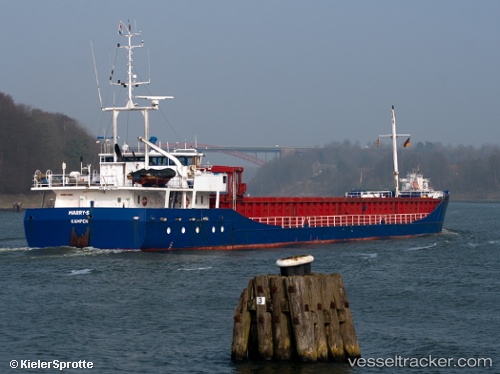 The 'Marry S.' suffered a blackout and engine failure about seven miles northwest of Pendeen, Land's End, on Jan 20, 2020, at 05.25 a.m. An investigation revealed that a leaking oil pipe had caused the problem. The crew carried out repair works, and the vessel resumed its voyage from Ijmuiden to Drogheda the same day with an ETA as of Jan 27, 7 p.m.

Ships docked in Antwerp after collision

The "Aldebaran J" berthed in the Vrasen Dock on June 28 at 9.50 p.m. The "Marry S" which had suffered severe bow damage berthed in dock 5 on June 29 at 7.15 a.m. Both will need to be repaired in a yard before sailing again. The hull of the "Aldebaran J" was punctured above the water line, some of the containers suffered damage or were destroyed too. The "Marry S" arrived at the Holland Shipyards in Giessendam for repairs on July 5 at 5 a.m.

Collision on the Wester Scheldt

On June 27, 2018, at 6.20 a.m. the "Aldebaran J" was in collision with the "Marry S" on the Wester Scheldt near the Spijkerplate at the height of Ritthem. Both ships were damaged, no injuries were reported. The "Aldebaran J" suffered damage to the bow, the "Marry S" a hole in the hull. There was no damage to the environment. Both ships dropped anchor on Flushing roads after the accident. for investigations by Rijkwaterstaat. The "Aldebaran J" had sailed from Grangemouth on June 27 short past midnight, bound to Antwerp. In the morning of June 28 she was moored in pos. 51° 25.00' N 003° 35.37' E. The "Marry S" had sailed from Antwerp on June 26 short before midnight. SHe was anchored in pos. 51° 24.90' N 003° 34.56' E. Dutch reports with photo and video: https://www.omroepzeeland.nl/nieuws/106685/Twee-schepen-in-aanvaring-op-Westerschelde https://www.hvzeeland.nl/nieuws/35820-twee-schepen-in-aanvaring-westerschelde/?utm_source=hvzeeland&utm_medium=website&utm_campaign=home https://www.112vlissingen-souburg.nl/2018/06/28/17197/twee-schepen-botsen-op-westerschelde-voor-ritthem https://binnenvaartlog.nl/twee-schepen-in-aanvaring-op-westerschelde/