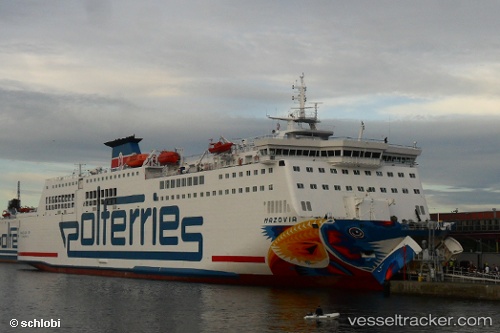 The "Mazovia" got disabled due to a generator fire on Oct 14, 2016, in Ystad. The ship was ready to leave the terminal at 2 p.m. when the fire alarm went on. One of the ship's generators had started to smoke after overheating. The fire was extinguished without causing greater damage to the propulsion system, but the generator had to be cooled and repaired. The crew worked all night, but was not able to resolve the problem so that the ship did get the permission from the authorities to resume the voyage. First the depature delayed by one hour, but at 6 p.m., it turned out that the generator was still too hot, and the sailing was now scheduled for 10.30 p.m. Passengers and truck drivers got an extra meal and could stay in their cabins. The departure was again postponed at midnight, and finally on Oct 15 they were asked to leave the ferry at 6 a.m. and had the opportunity to continue their journey with other transport means or get a refund for the tickets, but also complained a lack of information during the incident. The ship finally sailed on Oct 15 at 5 p.m. Polish report with photos and Audio: http://www.tvp.info/27348987/pozar-promu-z-ystad-do-swinoujscia-pasazerowie-koczuja-w-porcie-od-kilkunastu-godzin

On Dec 29, 2014, the "Mazovia" contacted the CROSS Jobourg after a crew member of 59 years was suffering neurological disorders. The Maritime Medical Consultation Centre in Toulouse recommended a medevac off the ship which was in the middle of the central English Channel, about 90 km northeast of Cherbourg. The CROSS mobilized an EC-225 helicopter of the Navy base in Maupertus with a team of the Medical Center of the Arny Querqueville on board. After 30 minutes the medical team was hoisted aboard the ferry. The Patient was then lifted onto the helicopter and transported to the airport Caen Carpiquet from where he was taken to the University Hospital of Caen.

EUROFERRY BRINDISI was bought by PŻB - POLFFERIES and renamed to MASOVIA, after modernization of the shipyard in Szczecin will operate between Swinoujscie - Ystad