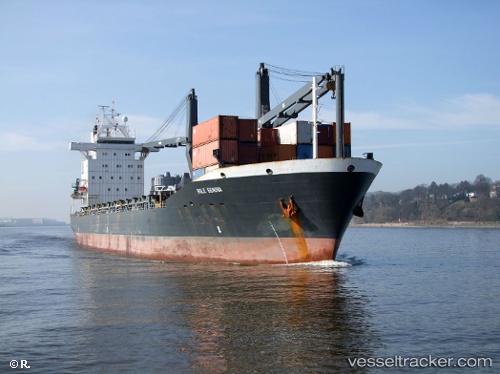 The Chief Executive Officer of the Port of Oran, Mohamed Aïci Mazari has been removed from his post following the allision of the ferry "Tassili II" with the "Han Xin" on Sep 1 inside the port. The decision was made by the Minister of Public Works and Transport, Abdelghani Zaalane, the day after this accident. Installed in this position in 2016, Aïci will not have lasted more than two years. The "Tassili II" had hit the cargo ship while leaving the port of Oran bound to Alicante, with 1287 passengers and 305 vehicleson board. Passengers waiting at the port of Alicante for Oran had to delay their journey by more than 24 hours, while a steel sheet was welded onto the breach in the starboard side foreship. The "Han Xin" had been pushed into the dock and suffered a leak. She remained in port by Sep 5. Repairs were carried out on site.

The Algerian ferry "Tassili II" was in allision with the "Han Xin", while leaving the port of Oran, Algeria, bound for Alicante, Spain, on Sep 1, 2018, at 2.30 a.m. The ferry suffered a hull breach of four meters length and six centimeters width at starboard side when it struck the other ship which had entered port on Aug 30. On board were 1,287 passengers and 305 vehicles. The ENTMV set up a crisis management unit, and the National Ship Repair Company (ERENAV) sent a team of technicians to proceed with the repair of the breach which was above the waterline, under the supervision of an expert from the Bureau Veritas classification society. The repair was expected be completed at the end of the day to allow the ship to sail safely and return to the port of Alicante. The ENTMV has taken the necessary steps to take care of passengers waiting in Alicante for the port of Oran. In addition, a team of officials from the Algerian shipping company CATMA and the ENTMV was dispatched by the Minister of Public Works and Transport to inquire about the situation of the ship and its passengers. An administrative technical team was appointed by the maritime authority to investigate the cause of the accident.

Sold to undisclosed buyers for $5 mill