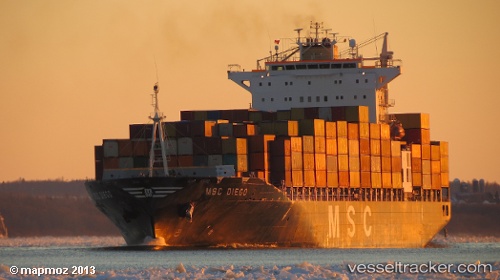 Police trying to retrieve boat that ran into MSC Diego

Police was back in the water on Aug 4 to retrieve the wreckage of a boat that collided with the "MSC Diego" on July 26 in the Port of Montreal. The boat was destroyed on impact and most of it sank. The 31-year-old Jean-Francois Geoffrion drowned, and his body was recovered several days later. Police were using a new, more powerful sonar system that they recently acquired to locate the wreckage. Once the damaged vessel was on dry land, the police hoped they would be able to determine why Geoffrion's boat ran into the freighter. Their current hypothesis was that Geoffrion hit a buoy before running into the freighter.

Search ongoing near Port of Montreal for missing person

Montreal police will resume their search Friday for a person who was presumed to be aboard a speed boat that collided with a container ship near the Port of Montreal late Tuesday. The accident happened about 10 p.m., and witnesses said at least one person was on the boat before it sank. Small pieces of the boat, along with a life vest, were found shortly before the initial search was called off due to darkness at about 1 a.m. Wednesday morning, said Montreal fire chief John Primiani. A search of the area, which extends to Varennes, was begun Wednesday by firefighters, Montreal police, the Canadian Coast Guard and a Sûreté du Québec helicopter. It continued Thursday with Montreal police and firefighters joined by an SQ search team in the afternoon. “The SQ has sonars more powerful than the ones we have, that is why they are collaborating with us for this search since some parts of the river are deeper,” Montreal police spokesperson Benoit Boisselle said. Police have not yet received a report of a missing person. http://montrealgazette.com/news/local-news/search-resumes-near-port-of-montreal-for-missing-person

A boater was presumed missing on the St. Lawrence River after a pleasure craft struck the "MSC Diego" which was moored at the Termont Maisonneuve Container Terminal in Montréal near the Louis-Hippolyte-La Fontaine tunnel on July 26, 2016, at 10 p.m. There may have been an individual on the boat according to a witness, a crane operator. But no one has been reported missing and a search with helicopters, surface craft and divers has not found any sign of the boat's occupants. Police were looking into a variety of causes for the incident, including the possibility of suicide. The 20-foot speedboat appeared to have struck the "MSC Diego" at high speed, and the small craft’s bow was badly damaged so the boat sank after the impact. The whole front end was found floating around before it sank. Helicopters of the Sûreté of Québec and a Hercules aircraft of the Canadian Air Force flew over the river in the evening. The Canadian Coast Guard, SIM firefighters and their colleagues from Longueuil as well as SPVM police officers participated in the search which included six boats which crossed the river. But only a few fragments of the boat, a life jacket and a portable toilet were found. The search was halted on July 27 at 4 p.m. but was expected to resume on July 28. It will include a larger stretch of the St. Lawrence, as the current may have carried objects from the scene for miles downriver. Divers equipped with sonar spotted parts of the boat, but no trace of the missing, presumably the driver of the boat, which could be aged between 20 and 30 years. The "MSC Diego" remained moored at its berth on the river. French reports with photos and video: http://www.tvanouvelles.ca/2016/07/27/collision-entre-deux-bateaux-au-moins-une-victime-recherchee http://journalmetro.com/local/mercier-anjou/actualites/999320/collision-sur-le-fleuve-saint-laurent-une-personne-toujours-recherchee/