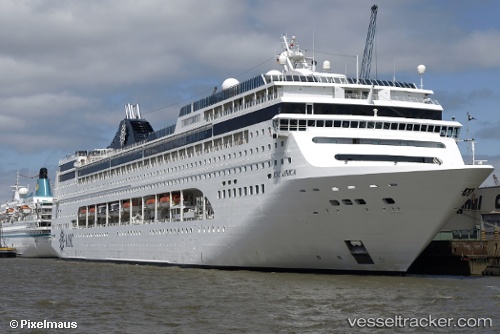 MSC was investigating the fire incident which was reported by the crew of the 'MSC Lirica' to the cruise line’s maritime support centre in London on March 13 at 3:42 p.m. local time in Corfu, where she is currently in warm layup. MSC said the fire originated from one of the ship’s starboard-side fibreglass lifeboats on deck six. It was brought under control thanks to the intervention of the ship’s two fire brigades and the support of the local emergency services. The incident operation was declared completed by 6:58 p.m. local time. From a preliminary assessment, there was no damage to the inside of the ship, but only to her side due to the flames and the dense black smoke caused by the fibreglass lifeboats. A full investigation is now in progress. Report with photos: https://www.travelweekly.com.au/article/investigation-underway-after-cruise-ship-catches-fire/

A fire broke out on the 'MSC Lirica' in Corfu on March 12, 2021 at 3.42 p.m. The cruise ship has been berthed at the pier in the port of Corfu Town for repair work since Jan 30. Black smoke rose on the starboard side of the ship. In the affected area in the middle of the ship from deck 7 upwards, flames were shooting from the ship and lifeboats. The fire apparently broke out above the promenade deck (deck 6). In this area from deck 7, the 'MSC Lirica' only has passenger cabins. A fiberglass lifeboat initially had caught fire. The vessel was docked on the outermost area of ​​the pier on a very narrow, recently built makeshift pier and inaccessible from there with heavy fire engines. Apparently it was a ferry that had picked up a fire engine. A second ferry was later added to support the fire fighting work, which has also taken on booard a fire engine. The first fire boat did not arrive in port until 4:19 p.m. and started to extinguish the fire from the outside. 38 firefighters rushed to the port with 13 vehicles and a fire fighting boat with eight firefighters. A naval and lifeboat of the Greek Navy arrived in the area, as well as three tugs. On the whole eight ships with 28 fire fighters on board were tackling the fire from the sea side. Five fire engines with 10 fire fighters arrived from Epirus with the K-Line-ferry 'Alkinoos'. Also the 'Grigoris M' was involved in the response. Water carriers of the Civil Protection of the municipality and the region were also assisting. An oil boom has also been set up around the cruise ship. The fire was brought under control around 6 p.m. At 6.58 p.m. the fire was declared out. No injuries were reported for the 51 crew members who were on board the ship at the time of the incident were reported. One fire fighter was taken to hospital for the suspicion of smoke intoxication. Damage to the interior was thought to have remained limited. The ship was currently in "warm layup" standby mode. Reports with photos: https://www.real.gr/koinonia/arthro/kerkyra_ypo_meriko_elegxo_h_fotia_pou_ksespase_sto_krouazieroploio_msc_lirica-721546/ https://www.cruiseindustrynews.com/cruise-news/24549-msc-lirica-is-on-fire-in-corfu.html https://twitter.com/CrewOfTheSeas/status/1370382162676092928 https://lemarin.ouest-france.fr/secteurs-activites/shipping/38458-le-paquebot-msc-lirica-en-feu-corfou

The Preveza Port Authority was informed by the "MSC Lirica" in the afternoon of Sep 17, 2019, that a 27-year-old passenger had fallen ill and was in need of immediate hospital care west of Lefkada. A patrol boat approached the cruise ship and took the patient off safely. He was then transported to the port of Preveza,from where he was taken by an EKAB ambulance to the General Hospital.