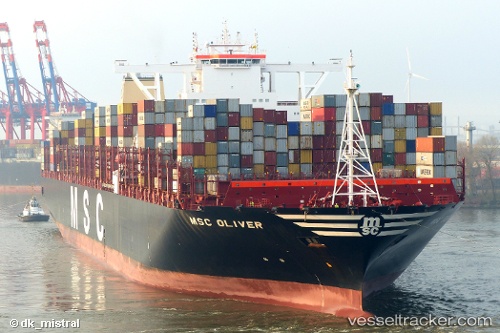 MSC Mediterranean Shipping Company has announced the delivery and inauguration of the MSC Oliver, the second ship in the company’s 19,224 TEU ‘Olympic Series’. MSC Oliver was inaugurated at the DSME shipyard in Busan, South Korea on Monday (March 30), just two months after the delivery of MSC Oscar, currently the world’s largest containership by TEU capacity. MSC Oliver is named after the nephew of the Diego Aponte, MSC’s President and CEO, and son of Pierfrancesco Vago, Executive Chairman of MSC Cruises, who was on-hand during the inauguration ceremony. MSC Oscar was named after Aponte’s son, Oscar. MSC Oliver is expected to enter service on the Albatross Service which operates between Asia-Europe later this week.

The 19,224 TEU MSC Oliver returned from sea trials this weekend (March 22) ahead of next month’s expected delivery to Mediterranean Shipping Company from the DSME shipyard in Okpo, South Korea. MSC Oliver will join sister ship MSC Oscar, the world’s biggest ship by TEU carrying capacity since its delivery November 2014, serving the Albatross string on MSC’s new East-West trade routes between Asia and Europe. The first two ships will be by followed by 18 additional vessels with a capacity over 19,000 TEU by 2016. MSC Oscar and Oliver however are the first of six ultra large containerships (ULCS) in the Olympic Series, which will all be delivered by November 2015.

First in a series of 20 vessels, MSC Oscar will be joined by sister ship MSC Oliver in April 2015 followed by the rest of the family over the coming months, Diego Aponte said in an interview with CNN, the shipping company said in a press release. Not only does Diego proudly talk about MSC Oscar as the “most efficient vessel on the planet”, able to carry 35% more cargo while reducing CO2 emissions by the same amount, but she is also special because she is named after his son. Diego spoke passionately about the MSC fleet, the challenges of the volatile container business, the barometer of global trade, and the fact that 65% of global transport is done through containers. Today, without containerization, there would be no globalization. Geneva-headquartered Mediterranean Shipping Company S.A. (MSC) was founded in 1970. Now it is the world's second shipping line in terms of container vessel capacity. MSC's fleet, which operates in all major ports of the world, comprises 471 vessels and has a capacity of 2,435,000 TEUs (as of end-December 2014).