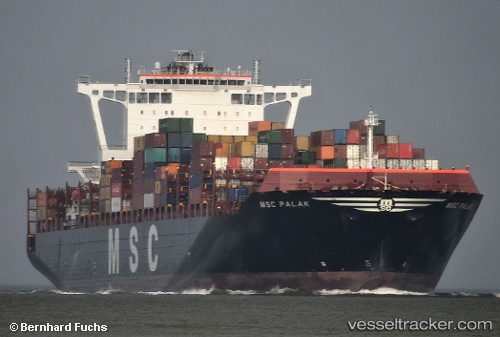 The 'MSC Palak' has been released from detentioon on July 21. She sailed from Ngqura at 11.40 p.m., next headed to Las Palmas, ETA Aug 1. The ship, which had arrived from Durban on July 12, had begun discharging and loading containers in the port of Ngqura when the Eastern Cape began experiencing stormy weather on the night of July 14 which resulted in heavy swells in Algoa Bay. As swells swept into the port of Ngqura via its entrance channel. the 'MSC Palak' discontinued cargo working and made ready to leave port to go to anchor outside at the anchorage. Either during the short journey to the anchorage or following her arrival and going to anchor that container stacks on board collapsed, with a number disappearing overboard. When this was reported to port authorities ashore it was initially stated that six boxes had fallen overboard, but at first light crew were able to confirm that 23 containers were lost and constituted a danger to other vessels. The task of coordinating salvage operations for the missing containers fell on the South African Maritime Safety Authority (SAMSA) along with several other stakeholders. The SAMSA carried out aerial surveillance in order to spot the floating boxes and debris. Salvage crews using boats towed the spotted debris to a safe place to ensure that it posed a minimal risk to ships navigating along the coast.” The Mediterranean Shipping Company (MSC) gave full support to the salvaging operations to recover any floating debris and assist with making the shipping lanes and the general area safe for navigation. MSC further committed their organisation to be financially responsible for any clean up that may be required in the bay and areas in the vicinity for the next five years, if deemed to be linked with the incident.

A total of 23 containers have gone overboard from the 'MSC Palak' on July 14, 2020, as she went to anchor in the outer anchorage of the Algoa Bay. Earlier the ship had been berthed at the Ngqura Container Terminal, but due to heavy swells entering the harbour, recorded at 3.5 meters, the vessel was required to leave port and ride out the stormy weather at the anchorage. The 'MSC Palak' departed on July 13 at noon, shortly after a severe storm swept across the Cape area, forcing the port of Cape Town to close, followed later by both Port Elizabeth and Ngqura which were reported as being windbound. On July 14 at 11.37 p.m. a report was received from the Port Control that the 'MSC Palak' had lost containers at number 2 anchorage. Initially it was stated that six containers had been lost overboard and had sunk, however at first light on July 15, the ship reported that the number of boxes lost overboard was in fact 23. At 8 a.m. a fishing vessel reported to the port control that they found containers drifting approximately seven nautical miles south of where the cargo loss had occurred. The South African Maritime Safety Authority (SAMSA) advised that none of the containers carried dangerous cargo. The safety authority also advised that the Port of Ngqura was closed for vessel traffic due to risk that some containers may have sunk in the approach channel, becoming a danger to navigation. On enquiry this was later clarified that Port of Ngqura remained operational but only for daylight operations. The Port of nearby PE remained fully operational 24 hours a day. SAMSA was working with the vessel owner to ensure all containers are salvaged and MSC has arranged an aerial surveillance flight to locate any drifting containers that may pose a hazard to shipping. The public has been asked to remain vigilant and report any containers sighted to SAMSA. The South African Maritime Safety Authority has commenced an investigation into the loss of the containers.